Thorlabs offers several component modules that can be used to mount numerous precision optical components. These modules can then be easily integrated into a FiberBench system, and position optics at a consistent beam height of 0.56" (14.2 mm). In each case, the module is designed with two steel dowel pins on its underside that fit into the receiving holes on the FiberBench. Once inserted, the design of the mount ensures that the optic will be at the appropriate height for use within the free-space subsystem.

Figure 1: An example of how to read a vernier scale. The red arrow indicates what is known as the pointer. Since the tick mark labeled 10 on the vernier scale aligns with one of the tick marks on the main scale, this vernier scale is reading 75.60 (in whatever units the tool measures).

That is essentially all there is to reading a vernier scale. It's a very straightforward way of increasing the precision of a measurement tool. To expound, let’s look at Figure 2. Here we see that the pointer is no longer aligned with a scale line, instead it is slightly above 75.6, but below 75.7; thus the gross measurement is 75.6. The first vernier line that coincides with a main scale line is the 5, shown with a blue arrow. The vernier scale gives the final digit of precision; since the 5 is aligned to the main scale, the precision measurement for Figure 2 is 75.65.

As we've seen here, vernier scales add precision to a standard scale measurement. While it takes a bit of getting used to, with a little practice, reading these scales is fairly straightforward. All vernier scales, direct or retrograde, are read in the same fashion. 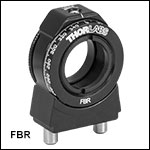 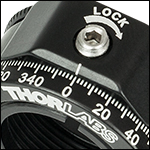 Click to Enlarge
The FBR mount has a rotation lock screw (0.050" hex) and engraved scale with 2° increments.

The FBR FiberBench-compatible rotation mount has a knurled edge and 360° laser-engraved scale marked at 2° increments. It is SM05-threaded (0.535"-40) for mounting optics, Ø1/2" lens tubes, and other SM05-threaded components. This mount is ideal for holding our Ø1/2" polarizers and wave plates (when removed from their Ø1" mounting cell). The mount's rotating cell has A convenient top-located setscrew (0.050" hex) secures the rotational position of the stage. 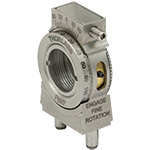 The FBRP stainless steel, FiberBench-compatible rotation mount. The mount's SM05-threaded (0.535"-40) rotating cell has a knurled edge for coarse positioning. After fastening the engagement screw with a 0.028" hex key, the cell can be precisely positioned by turning the actuator at the top of the part with a 0.050" hex key. As the graduations engraved on the cell are 2°, values read from the vernier scale can be converted to arcmins by multiplying by a factor of two. Mount Ø1/2" optics, Ø1/2" lens tubes, and other SM05-threaded components.

This mount is ideal for holding our Ø1/2" polarizers and wave plates (when removed from their Ø1" mounting cell). We also offer FiberBench Polarization Modules and FiberBench Rotating Wave Plate Modules, which have linear polarizers, quarter-wave plates, or half-wave plates pre-mounted in FBRP rotation mounts. 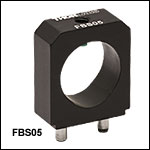 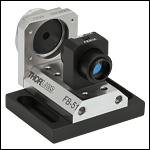 The FBS05 lens tube mount can hold Ø1/2" lens tubes at a beam height of 0.56" (14.2 mm) and enables the incorporation of Ø1/2" optical elements into the FiberBench system. A Ø1/2" lens tube can slip into the FBS05 and then be locked in place with the nylon-tipped 8-32 setscrew located at the top of the mount. The two dowel pins on the mount easily fit into the receiving holes on any of our Single-Axis or Multi-Axis FiberBenches. 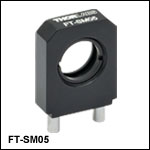 The FT-SM05 optics mount is designed to hold Ø1/2" optics (ND filters, diffusers, colored filters, and the VRC2D05 alignment disk) while maintaining the appropriate beam height when placed on a FiberBench. It features our standard SM05 thread (0.535"-40). 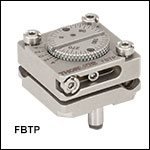 These tip/tilt rotation FiberBench mounts are designed to mount either 5 mm cube optics, such as polarizing or non-polarizing beamsplitter cubes, (item # FBTC) or 1 mm thick plate optics up to 12.7 mm (0.5") wide, such as beamsplitters or mirrors, (item # FBTP) while maintaining the appropriate beam height. Both versions require epoxy to mount optical components. The circular rotation plate can be rotated a full 360° and is engraved with a scale marked every 5°. Additionally, a Vernier scale provides 1° resolution for fine rotation. These mounts do not suffer from left/right handedness restrictions, and thus can be used in any orientation on a FiberBench.

An engraved dot is present on the FBTP Plate Optic Mount between the 0° and 90° engravings. Beamsplitter optics should be installed with the beamsplitter coating facing this dot. This allows an incident beam to be aligned so that it is split at the center of the mount.

Additional locking collars and spanner wrenches are also available for purchase separately. If desired, two locking collars can be used together to create a hard stop (see Figure 4). Alternatively, a single collar can be epoxied to an adjuster using our G14250 epoxy to create a permanent hard stop.

We also offer post-mountable versions of these mounts with 8-32 (M4) taps for general mounting of optics on Ø1/2" Posts. 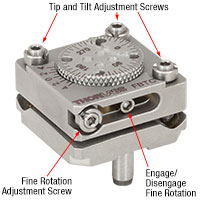 Click to Enlarge
Figure 1: These are the adjuster locations on the FBTC mount. The FBTP has its adjustment screws in the same locations. 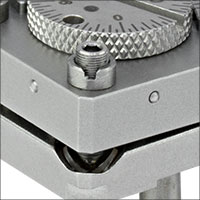 Click to Enlarge
Figure 2: A single locking collar can lock an adjuster in position. 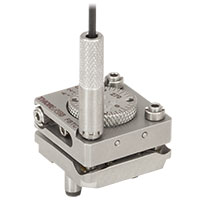 Click to Enlarge
Figure 3: Use the included hex key and spanner wrench to lock an adjustment screw in place. 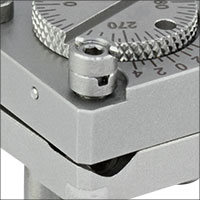 Click to Enlarge
Figure 4: Two collars can be locked together to create a hard stop. 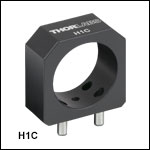 This mount secures our Free-Space Isolators with an outer diameter of 0.865" to our FiberBench series, aligning the optical axis with the isolator. The mount is compatible with all of our FiberBenches. 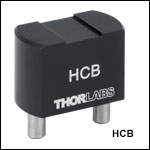 Click to Enlarge
The HCB platform is used in our PBB-VIS-10-L Beam Displacer Module.

The HCB Static Mounting Base allows a user-supplied optic to be secured to the top surface with epoxy and then inserted at the correct height into a FiberBench setup. Once inserted into the receiving holes of the FiberBench , the distance from the top surface of the platform to the point at which the source beam will strike the optic is approximately 1.5 mm. The figure to the right shows Thorlabs' PBB Polarizer attached to the HCB base. 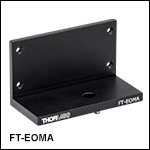 The FT-EOMA is a mounting bracket used to mount an Electro-Optic (EO) Modulator onto a FiberBench. The length of the bench needs to be at least 70 mm in the direction you wish to mount the modulator. Incorporation of the optional EO Modulator optic mount and polarizer (EO-GTH5M) will require a longer FiberBench. The Linear Polarizer modules are well suited for use with an EO Modulator in a FiberBench System. 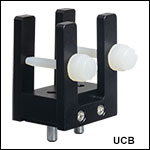 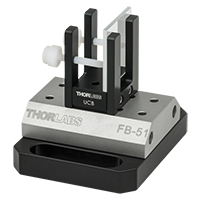 The UCB Universal Component Base is designed to secure a square optic, while maintaining the appropriate beam height, for use in a FiberBench system. Optics up to 15 mm thick can be secured into place using two nylon thumbscrews. 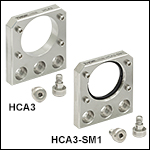 These Wall Plates can be attached to the sides of a FiberBench using the two included 8-32 mounting screws. The HCA3 and HCA3-SM1 are used to mount FiberPorts to FiberBenches using the four included 2-56 screws (see photo to the right). The HCA3-SM1 is internally SM1 (1.035"-40) threaded for compatibility with our Ø1" Lens Tubes and other SM1-threaded devices such as Thorlabs' Photodetectors. Each wall plate includes screws for mounting to our FiberBenches and the SM-threaded wall plates each include one retaining ring. 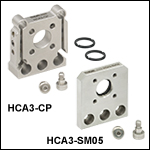 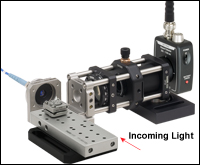 View Imperial Product List
View Metric Product List
The HCA3-CP is used to combine a FiberBench and a 30 mm Cage System for a power sampling application. A beamsplitter picks off light to a detector and allows the rest of the signal to be coupled into a Fiber Patch Cable using a FiberPort. A polarizer between the beamsplitter and the detector allows the polarization state of light entering the fiber to be monitored. 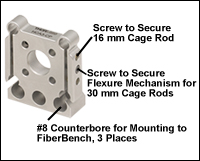 Click to Enlarge
View Imperial Product List
View Metric Product List
Output from a fiber passes through a
FiberBench-based polarization controller before entering a 16 mm cage system through the HCA3-CP.

These Wall Plates allow FiberBenches to be combined with Thorlabs' Cage Systems. They can be attached to the sides of a FiberBench using the two included 8-32 mounting screws. The HCA3-SM05 features four 4-40 taps and is internally SM05- threaded (0.535"-40) for compatibility with our 16 mm Cage System and Ø1/2" Lens Tubes, respectively (see photo to the right).

The HCA3-CP can accept cage rods for 30 mm and 16 mm cage systems either simultaneously or separately. Three #8 counterbores on the bottom of the plate allow it to be mounted to one of Thorlabs' FiberBenches. The plate accepts Ø4 mm or Ø6 mm cage rods for 16 mm or 30 mm cage systems, respectively. The Ø4 mm cage rods are held in place for by locking screws that accept a 0.05" (1.3 mm) hex key. The Ø6 mm cage rods are secured using a flexure mechanism that can be tightened by a single locking screw on each side of the mount that accepts 5/64" (2.0 mm) hex keys. The port through the center is SM05-threaded, allowing it to accept lens tubes or other threaded optical components.

Each wall plate includes screws for mounting to our FiberBenches. The HCA3-SM05 ships with one SM05RR retaining ring to aid in securing SM05-threaded components, while the HCA3-CP ships with two retaining SM05RR rings to secure unmounted optics up to 0.21" (5.3 mm) thick, such as Thorlabs' Premium Hard-Coated Bandpass Filters. 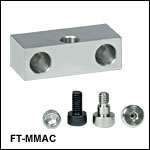 View Product List
A KS05 mirror mount positioned on a fiber bench with a FT-MMAC.

The FT-MMAC is ideal for mounting mirror mounts (or any 8-32 threaded mount) to the side of our FiberBenches. The FT-MMAC comes with all the screws necessary to mount it to the bench (two 8-32 shoulder screws) and to the mirror mount (one 8-32 and one M4). The FT-MMAC can be used to position a wide variety of our precision, smooth bore, or compact mirror mounts. Additionally, users can mount one of our VH1 V-clamps with this versatile adapter. 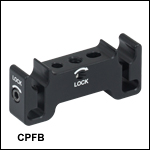 This 30 mm Cage System Mount for FiberBench Components allows integration of our line of FiberBench Components with our 30 mm cage system. It includes two through holes that fit the dowel pins on our FiberBench optic mounts. Once the dowels have been inserted, they can be locked in position using a 0.035" balldriver or hex key to tighten the setscrew on the front face of the mount.

The mount includes two snap-in flexure clamps for attaching our Ø6 mm cage rods, which can be locked with a 5/64" (2.0 mm) hex key. This snap-in feature allows components to be easily inserted and removed without disassembling the entire cage system. When this mount is used in a cage system that is attached to a FiberBench with the HCA3-CP cage plate, the beam height for all optical components is the same. An 8-32 (M4) tapped hole on the bottom of the CPFB mount can be used to secure it to a Ø1/2" post. Please note that this cage system mount cannot be used with FiberBench optic mounts that are more than 0.75" (19.1 mm) wide in the direction perpendicular to the optical axis. 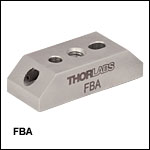 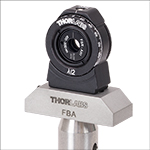 Thorlabs' FBA (/M) FiberBench Adapter Mounts can be used to secure compatible FiberBench accessories to Ø1/2" Posts. The FBA can be mounted to a Ø1/2" post via the 8-32 (M4) tapped hole that goes through the center of the adapter. This freedom to mount individual pieces to a post gives the user the option of using the compact FiberBench accessories for free space applications.