This plot gives the wavelength-dependent output power as a function of input power for our polarization-maintaining EDFA. A complete set of performance graphs is available on the Graphs tab.

Thorlabs' core-pumped erbium-doped fiber amplifiers (EDFAs) offer >20 dBm (>100 mW) output power with a low noise figure of <5 dB. They are enclosed in a compact, turnkey benchtop package with FC/APC input and output connectors. The EDFA100S is a single mode EDFA with minimal sensitivity to the light polarization, while the EFDA100P is a polarization-maintaining EDFA that only amplifies light polarized along the slow axis of the fiber. Each EDFA includes built-in input and output isolators. In order to support applications involving femtosecond pulses, they are engineered to impart minimal dispersion. The fs Pulse Amplification tab contains more details on femtosecond operation. In addition, dispersion-compensating patch cables for the EDFAs or with custom dispersion compensation are available upon request; please contact Tech Support for more information.

The pump current of the erbium-doped fiber amplifier is adjustable through the instrument's front panel, allowing the user to vary the gain and output power of the amplifier. In addition, remote control of the pump current is supported by sending serial commands via a USB 2.0 connector. For added safety, the user may connect an interlock circuit to the 2.5 mm mono jack on the rear panel.

Each EDFA uses a universal power supply allowing operation over 100 - 240 VAC, 50 - 60 Hz without the need to select the line voltage. A region-specific power cord is included. 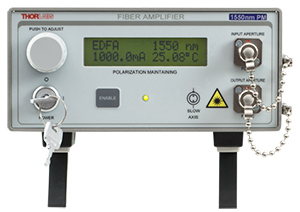 Click to Enlarge
EDFA100P Front Panel
The front panel of the EDFA includes a digital display, a rotating knob that adjusts the pump laser current, a key switch, and an amplifier enable switch button paired to a green LED. 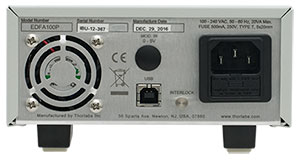 Click to Enlarge
EDFA100P Back Panel
The back panel of the EDFA includes a USB type B connector for remote operation and a 2.5 mm mono jack for a user-designed interlock circuit.

Unless otherwise indicated, all specifications below are valid for CW inputs only.

Unless otherwise stated, all performance graphs below were obtained using a CW input, the maximum pump current of 1000 mA, and the factory pump temperature setting of 25 °C. This data reflects the typical performance of our EDFAs, and is presented for reference only. The guaranteed specifications are shown in the Specs tab.

Click to Enlarge
Click for Raw Data
The typical EDFA100S gain as a function of the wavelength. The blue-shaded region denotes the specified operating wavelength range.

Click to Enlarge
Click for Raw Data
The typical EDFA100P gain as a function of the wavelength. The blue-shaded region denotes the specified operating wavelength range.

Click to Enlarge
Click for Raw Data
The typical EDFA100S noise figure as a function of the wavelength. The blue-shaded region denotes the specified operating wavelength range.

Click to Enlarge
Click for Raw Data
The typical EDFA100P noise figure as a function of the wavelength. The blue-shaded region denotes the specified operating wavelength range.

Below, we present measurements that show how the temporal profile of a 430 fs FWHM input pulse at 1550 nm is affected by propagation through the EDFA100P amplifier.

These 430 fs FWHM, 22 pJ pulses were propagated into the EDFA100P amplifier. In some cases, the fiber oscillator was connected directly to the amplifier, while in others, the fiber oscillator was connected to the amplifier through an intermediary dispersion-compensating fiber patch cable. The total output power was varied by adjusting the EDFA100P pump current. We measured the temporal profile of the amplified output pulses as a function of the output power using an intensity autocorrelator.

Results
We characterized the amplified output pulses at three output pulse energies: 0.3 nJ, 0.6 nJ, and 1.1 nJ. The measurements were stopped at 1.1 nJ output pulse energy because nonlinearities appeared in the temporal profile. The data in each graph has been normalized to make the shapes of the autocorrelations easier to compare.

Click to Enlarge
When the amplifier was set to 0.3 nJ output pulse energy, we observed minimal distortion to the temporal profile of the output pulse. The use of a dispersion-compensating fiber (DCF) compressed the output pulse to 150 fs.

Click to Enlarge
When the amplifier output pulse energy was doubled to 0.6 nJ, there was still minimal distortion to the non-precompensated output pulse. By applying precompensation, the output pulse was compressed to 88 fs, but pedestals associated with nonlinearities appeared on the sides. The peak output power in the precompensated case was 6 kW.

Conclusion
When the peak power of the output pulse is ~1 kW or lower, nonlinearities in the temporal profile of the output pulse are minimal. (This peak power limit corresponds to a B integral between 1 and 2, below the limit at which nonlinear optical effects can become significant.) As the peak power increases beyond ~1 kW, spectral broadening due to self-phase modulation and other nonlinear optical effects compresses the pulse width and distorts the temporal profile. A careful balance between the initial chirp on the pulse, the amplifier dispersion, and the pulse energy can produce nonlinearly compressed pulses with low distortion.

An example of this is shown in the 0.6 nJ case above. When used with a femtosecond erbium oscillator and a precompensating fiber, the EDFA100P amplifier is capable of producing <100 fs pulses that have peak power of 6 kW. Without a precompensating fiber, the amplifier still provides high gain and minimal temporal distortion by keeping the peak power of the output pulse (and the B integral) below the threshold for nonlinearity.

Because the gain recovery time of a semiconductor amplifier (10 ps to 100 ps timescale) is shorter than the repetition period, the gain medium recovers before the next pulse in the pulse train arrives at the semiconductor amplifier. Therefore the same process is repeated for each pulse. In fiber amplifiers, the free carrier lifetime (10 µs to 1 ms timescale) is much longer than the repetition period. Consequently, fiber amplifiers can be thought of as responding to the pulse's average power, as opposed to its peak power.

An additional point that is especially relevant to femtosecond pulses is the role of nonlinear processes in the amplifier. While the nonlinear response of a fiber amplifier is almost instantaneous, the nonlinear response time of a semiconductor amplifier is in the 10 ps to 100 ps timescale, as it is related to its carrier lifetime. This ps timescale represents another source of pulse distortions when the pulse energy exceeds the saturation energy.

Includes drivers required to control our EDFA100x fiber amplifiers in a Windows® environment.