This plot gives the output power as a function of input power for our polarization-maintaining YDFAs. A complete set of performance graphs is available on the Graphs tab.

Thorlabs' Core-Pumped Ytterbium-Doped Fiber Amplifiers (YDFAs) offer 20 dBm (100 mW) typical output power with a low noise figure of <8 dB. Each is enclosed in a compact, turnkey benchtop package with FC/APC input and output connectors. In order to support applications involving femtosecond pulses, they are engineered to impart minimal dispersion. Each YDFA includes built-in input and output isolators to minimize back reflections to the amplifier and light source. Custom amplifiers with higher output power and gain is also available upon request; please contact techsupport@thorlabs.com with inquiries.

The pump current of the ytterbium-doped fiber amplifier is adjustable through the instrument's front panel, allowing the user to vary the gain and output power of the amplifier. In addition, remote control of the pump current is supported by sending serial commands via a USB 2.0 connector. For added safety, the user may connect an interlock circuit to the 2.5 mm mono jack on the rear panel.

Each YDFA uses a universal power supply allowing operation over 100 - 240 VAC, 50 - 60 Hz without the need to select the line voltage. A region-specific power cord is included. 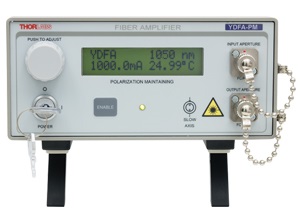 Click to Enlarge
YDFA100P Front Panel
The front panel of the YDFAs include a digital display, a rotating knob that adjusts the pump laser current, a key switch, and an amplifier enable switch button paired with a green LED. 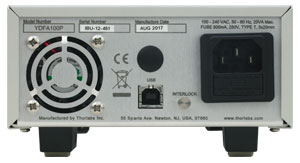 Click to Enlarge
YDFA100P Back Panel
The back panel of the YDFAs include a USB type B connector for remote operation and a 2.5 mm mono jack for a user-designed interlock circuit.

Unless otherwise indicated, all values are specified for a CW input beam at 1050 nm.

Unless otherwise stated, all performance graphs below were obtained using a CW input, the maximum pump current of 1000 mA, and the factory pump temperature setting of 25 °C. Performance may vary from unit to unit; this data reflects the typical performance of our YDFAs, and is presented for reference only. The guaranteed specifications are shown in the Specs tab.

Click to Enlarge
Click for Raw Data
The typical gain as a function of the wavelength. The blue-shaded region denotes the specified operating wavelength range.

Click to Enlarge
Click for Raw Data
The typical noise figure as a function of the wavelength. The blue-shaded region denotes the specified operating wavelength range.

Ultrafast pulses amplified by a YDFA will experience some pulse broadening due to dispersion effects. This dispersion is a natural consequence of light moving through the doped gain fiber and other fiber components and cannot be eliminated completely. Thorlabs' YDFA amplifiers optimize the gain fiber length to minimize dispersion and nonlinearity while maximizing the amplification gain. After amplification, the pulse can be compressed to attain a pulse width closer to the input pulse. The fibers used in the YDFA100P and YDFA100S have identical dispersion and nonlinearity and thus can both be used in femtosecond applications.

Simulated results of amplification for three different input pulses through the YDFA100P amplifier are shown in the graphs below and the table to the right. The input pulses are specified at 1045 nm and 26 pJ pulse energy, and with a 50 fs, 100 fs, or 200 fs pulse width. The YDFA amplifier simulations set the gain at 1045 nm to 17.1 dB and use the measured gain spectral shape in calculating the amplified pulse. In addition, the YDFA is modeled with 1 m of polarization-maintaining fiber before and after the amplifier. Finally, the results below also show simulated pulse compression of the post-amplification pulse using a pair of 1200 lines/mm diffraction gratings. Optical loss in the grating pair has been neglected for the calculation of the peak power values shown in the table.

This experiment combines measurement of an amplified pulse in the YDFA100P with numerical simulation of the expected output pulse. A 117 fs input pulse was generated using a 100 MHz oscillator. The YDFA100P was used to amplify the pulse from a 2.6 mW average power to 140 mW, and then the output pulses were compressed using an external pulse compressor. The input and output pulse intensity profiles were characterized using frequency-resolved optical gating (FROG) measurements.

The results shown below indicate that the amplified pulses were compressible to their original width due to the low nonlinearity and third-order dispersion effects in the YDFA. Simulations of the input and output pulse using the model discussed above are also shown alongside the experimental data and show relative agreement with the experimental results. The fibers used in the YDFA100P and YDFA100S have identical dispersion and nonlinearity and thus can both be used in femtosecond applications.

Click to Enlarge
Experimental and numerically simulated pulses before amplification and after with pulse compression are shown. Experimental data is provided courtesy of Tong Zhou and Russel Wilcox at Lawrence Berkeley National Laboratory.

Because the gain recovery time of a semiconductor amplifier (10 ps to 100 ps timescale) is shorter than the repetition period, the gain medium recovers before the next pulse in the pulse train arrives at the semiconductor amplifier. Therefore the same process is repeated for each pulse. In fiber amplifiers, the free carrier lifetime (10 µs to 1 ms timescale) is much longer than the repetition period. Consequently, fiber amplifiers can be thought of as responding to the pulse's average power, as opposed to its peak power.

An additional point that is especially relevant to femtosecond pulses is the role of nonlinear processes in the amplifier. While the nonlinear response of a fiber amplifier is almost instantaneous, the nonlinear response time of a semiconductor amplifier is in the 10 ps to 100 ps timescale, as it is related to its carrier lifetime. This ps timescale represents another source of pulse distortions when the pulse energy exceeds the saturation energy.

Includes drivers required to control our YDFA100S and YDFA100P fiber amplifiers in a Windows® environment.