This fiber launch system only includes optomechanical components (see the Components tab for a complete list of components). The table to the right lists the recommended optics for focusing collimated light into the output fiber (KT110). Note that to reach the best coupling performance into a multimode fiber, the numerical aperature of the lens should match that of the fiber. Similarly, for optimized coupling into a single mode fiber the spot size of the focused beam must be less than the mode-field diameter of the fiber.

Many applications, such as holography, require a beam with uniform intensity. The KT310 spatial filter is ideal for producing a clean, spatially uniform, Gaussian beam. The input of this system consists of a Z-axis translator, which can house a diffraction-limted aspheric lens. This aspheric lens focuses the beam through a pinhole, which can be mounted in the XY translator. The output consists of a Ø1" cage mount, which holds and centers a collimating optic.

This filter system only includes optomechanical components (see the Components tab for a complete list of components). The aspheric lens, collimating optics, and pinhole must be purchased separately. Please refer to the Tutorial tab for more information on choosing the appropriate optics and pinhole for your application.

For many applications, such as holography, spatial intensity variations in the laser beam are unacceptable. Our KT310 spatial filter system is ideal for producing a clean Gaussian beam.

The input Gaussian beam has spatially varying intensity "noise". When a beam is focused by an aspheric lens, the input beam is transformed into a central Gaussian spot (on the optical axis) and side fringes, which represent the unwanted "noise" (see Figure 2 below). The radial position of the side fringes is proportional to the spatial frequency of the "noise".

By centering a pinhole on a central Gaussian spot, the "clean" portion of the beam can pass while the "noise" fringes are blocked (see Figure 3 below).

The diffraction-limited spot size at the 99% contour is given by:

Choosing the Correct Optics and Pinhole for Your Spatial Filter System

The correct optics and pinhole for your application depend on the input wavelength, source beam diameter, and desired exit beam diameter.

For example, suppose that you are using a 650 nm diode laser source that has a diameter (1/e2) of 1.2 mm and want your beam exiting the spatial filter system to be about 4.4 mm in diameter. Based on these parameters, the C560TME-B mounted aspheric lens would be an appropriate choice for the input side of spatial filter system because it is designed for use at 650 nm, and its clear aperture measures 5.1 mm, which is large enough to accommodate the entire diameter of the laser source.

Finally, we need to choose the optic on the output side of the spatial filter so that the collimated beam's diameter is the desired 4.4 mm. To determine the correct focal length for the lens, consider the following diagram in Figure 4, which is not drawn to scale. From the triangle on the left-hand side, the angle is determined to be approximately 2.48o. Using this same angle for the triangle on the right-hand side, the focal length for the plano-convex lens should be approximately 50 mm.

For optimal performance, a large-diameter aspheric lens can be used in place of a plano-convex lens if the necessary focal length on the output side is 20 mm (see AL2520-A, AL2520-B, AL2520-C). These lenses are 25 mm in diameter and can be held in place using the supplied SM1RR Retaining Ring. 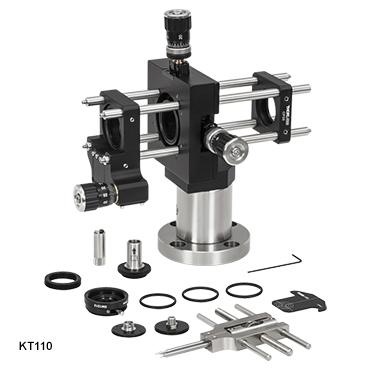 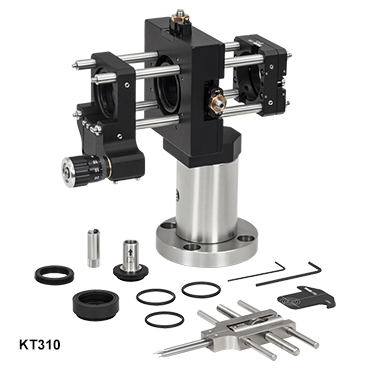 Click to Enlarge
Figure 1: The beam circularization systems were placed in the area of the experimental setup highlighted by the yellow rectangle. 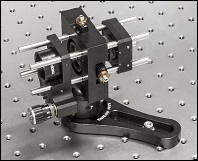 Thorlabs offers three standards defined by the center-to-center spacing of the cage assembly rods (see image below). The 16 mm cage, 30 mm cage, and 60 mm cage standards are designed to accomodate Ø1/2", Ø1", and Ø2" optics, respectively. Specialized cage plates that allow smaller optics to be directly inserted into our larger cage systems are also available. 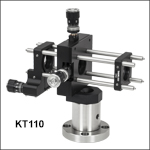 The KT110 fiber launch system is designed to couple free-space laser beams into fiber optic cables terminated with either FC or SMA connectors. This fiber launch system is directly compatible with many of our diffraction-limited aspheres, which offer superior performance when compared to traditional microscope objectives. The C230TMD aspheric lens, which has an equivalent microscope maginification of 35X, is an ideal choice for most free-space coupling applications. 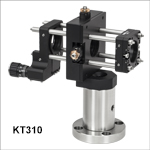 The KT310 spatial filter is ideal for producing a "clean" Gaussian beam. The input side consists of a Z-translator that will hold a diffraction-limited aspheric lens to focus the laser through a pinhole. For easy adjustment, the pinhole should be mounted in the XY translator. Threaded holes on the output side are provided for mounting and centering a Ø1" collimating optic. Please see the Tutorial tab for more information on selecting the appropriate optics and pinhole for your application.