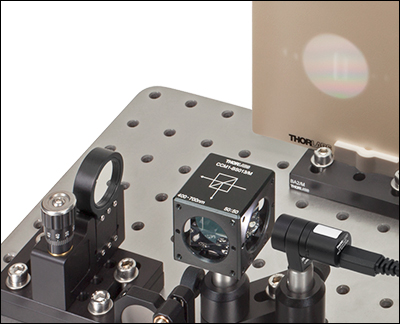 Thorlabs' Michelson Interferometer Demonstration Kit highlights several ways that an interferometer can be used to take highly sensitive measurements. A laser and LEDs allow students to explore the concept of interference and examine how the coherence length of different light sources will affect the interferometer output. The interferometer can be aligned to produce white light interference using the included white LED, as shown in the photo to the right. Students can also use the lab setup to determine the refractive index of Plexiglas plates and the thermal expansion coefficient of an aluminum rod.

Thorlabs' line of educational products aims to promote physics, optics, and photonics by covering many classic experiments, as well as emerging fields of research. Each educational kit includes all the necessary components and a manual that contains both detailed setup instructions and extensive teaching materials. These lab kits are being offered at the price of the included components, with the educational materials offered for free. Technical support from our educational team is available both before and after purchase.

Purchasing Note: Each educational kit contains both the English and German language versions of the manual, as well as US-, UK-, European-, and Chinese-style power cords. The power supplies and other electronic devices in both the metric and the imperial kit accept voltages of 230 VAC and 120 VAC. Some power supplies include a switch for selecting the mains voltage. See the respective manuals for details. Please contact Tech Support if you need a different cord style or power supply. The educational kits can be made portable using the CPS1 5 VDC Battery Pack (sold separately) to power the laser diode module or LEDs. As with all products on our website, taxes are not included in the price shown below.

Thorlabs' Michelson Interferometer Kit allows students to build a basic Michelson Interferometer and use their system to measure physical properties of a laser source and several materials. The kit includes all of the components needed to create a functioning interferometer including light sources, mirrors, a beamsplitter cube, and screen. The manual (available on our website and included with each kit) includes an explanation of the underlying theory behind each experiment as well as detailed instructions. A summary of the experiments supported by the kit is provided below.

A common misconception among students is that light from the system is lost when destructive interference is observed on the viewing screen. To address this, an additional beamsplitter plate is included to allow students to observe the second output of the interferometer, i.e., the light that travels back towards the laser output, as shown in Figure 2. Students can see that when a bright spot is observed at the center of the interference pattern from the primary interferometer output, the secondary interferometer output has a dark spot at the center (see Figure 3). The light is simply re-distributed, not lost from the system. 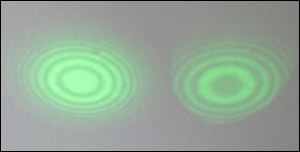 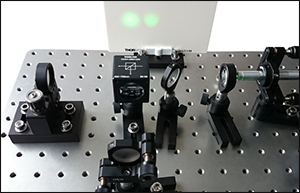 Click to Enlarge
Figure 1. A Schematic of the Beam Path in a Basic Michelson Interferometer

Wavelength Measurement and Using the Interferometer as a Spectrometer

The kit guides students through an experiment that allows them to determine the wavelength of the included laser source, and then measure the wavelength difference between two spectral peaks in the laser's emission profile. To perform the first experiment, students count the number of light-dark-light transitions that occur as the mirror is moved a specified distance using a translation mount with a micrometer drive. Then, the wavelength can be calculated using the equation:

where Δx is the distance that the mirror is moved, N is the number of transitions, and λ is the wavelength of the laser. 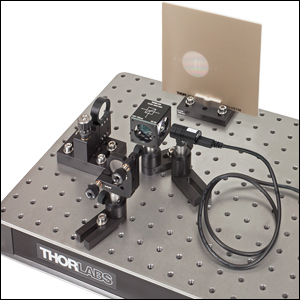 Click to Enlarge
Figure 4. The kit includes a white light LED that can be used to observe white light interference, allowing students to explore the concept of coherence length.

where ΔLc is the coherence length, λ0 is the center wavelength, and Δλ is the bandwidth.

After aligning their setup using the laser and red LED, students can place the included white LED in the setup to generate white light interference.

Click to Enlarge
Figure 5. Rotating a Plexiglas plate in one interferometer arm allows the refractive index to be measured.

Determining the Refractive Index of a Material

where N is the number of light-dark-light transitions, λ is the wavelength of the laser light, t is the thickness of the Plexiglas plate, and α is the rotation angle of the plate. A detailed description of how to derive this equation based on the interferometer geometry is provided for students in the manual. 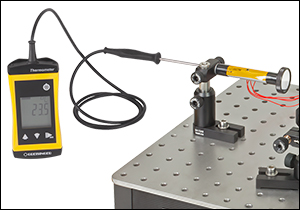 Click to Enlarge
Figure 6. One mirror of the interferometer is mounted on the end of an aluminum rod that is wrapped in a heater. The rod temperature is monitored, allowing the coefficient of thermal expansion to be calculated using the temperature change and total number of fringes that move out of the center of the interference pattern as the rod expands.

Measuring the Coefficient of Thermal Expansion

The final experiment enabled by the kit allows the thermal expansion coefficient of an aluminum rod to be measured using the kit. The rod is wrapped in a foil heater and mounted with a mirror attached to one end, as shown in Figure 6.* This assembly takes the place of the mirror at the end of one of the interferometer arms, and the setup is aligned so that interference is visible. A temperature sensor is inserted into the back end of the aluminum rod, allowing the rod temperature to be recorded. The resistive heater is connected to a voltage source, heating the rod and causing it to expand; this, in turn, causes the mirror position to shift. Students count the number of dark-light transitions that occur at the center of the interference pattern during this process, which corresponds to the change in the optical path length caused by the expansion of the rod due to heating. The coefficient of thermal expansion, α, can be calculated from the number of light-dark-light transitions and temperature change as follows:

where N is the number of light-dark-light transitions, λ is the wavelength of the light source, L0 is the original length of the rod, and ΔT is the temperature change.

*The necessary variable power supply to drive the heater is not provided in the kit. 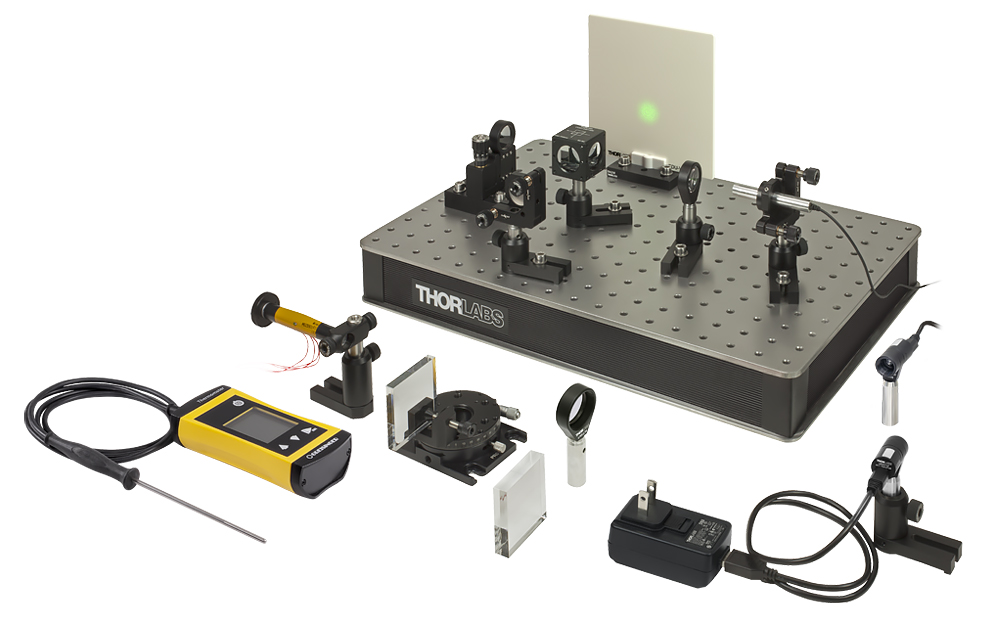 Thorlabs' Michelson Interferometer Educational Kit is available in imperial and metric versions. In cases where the metric and imperial kits contain parts with different item numbers, metric measurements are indicated by parentheses unless otherwise noted.

A recent application of the Michelson interferometer that attracted a lot of international attention is gravitational-wave detection. Gravitational waves are oscillations in spacetime curvature produced by colliding black holes, neutron stars, and other astrophysical processes that involve a dense concentration of mass-energy moving at relativistic speeds. A network of laser interferometers has been constructed in several countries to detect these waves. This includes the Laser Interferometer Gravitational-Wave Observatory (LIGO) in the United States, VIRGO in Italy, GEO600 in Germany, and KAGRA in Japan. All of these experiments consist of a Michelson interferometer with kilometer-scale arm lengths. The mirrors are suspended and free to swing in the plane of the interferometer. A passing gravitational wave will shrink the mirror-beamsplitter distance in one arm of the interferometer while stretching that distance in the other arm. The oscillating shrinking/stretching pattern induced by the passing wave is recorded as an oscillating signal in the photodetector. 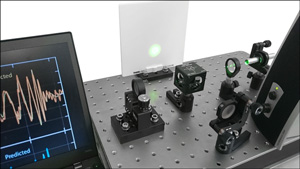 Click to Enlarge
Loud music with a strong bass line causes fluctuations in the interference pattern.

On September 14, 2015 the twin LIGO detectors (in Washington state and Louisiana) made the first direct detection of a gravitational wave. The signal (which was measured with high confidence in both detectors) was produced by an orbiting pair of black holes that merged together about a billion light years away. This signal caused the LIGO mirrors to move by about 10-18 meters, or nearly one-thousandth the diameter of a proton. Michelson interferometers can thus perform some of the most sensitive length measurements possible. LIGO and its partner observatories are vastly more complicated than the interferometer in this kit, but the fundamental physical principle behind their operation is Michelson interferometry.

We cordially thank the LIGO collaboration, in particular Marc Favata, Nancy Aggarwal, and Maggie Tse, for this addition to the webpage.

Thorlabs offers three demonstration kits that make use of an interferometry setup. Each kit is designed to target a different topic and includes accessories to support the experiments described in the kit manual. The EDU-MINT2 interferometer kit is designed to explore the experimental uses of a Michelson Interferometer, while the EDU-BT1 and EDU-QE1 analogy demonstrations are designed to explore concepts in quantum mechanics. Due to the nature of the experiments in the EDU-MINT2 kit, an intrinsically damped breadboard is included to minimize vibrations as students interact with the setup. This added feature supports some of the more challenging experiments, especially the wavelength measurement and white light interference exercises. The other two demonstration kits are built on lighter, aluminum breadboards as the experiments outlined in these kits require less interaction with the setups and vibration is therefore less of an issue. The table below outlines the key features and educational topics addressed by each kit to aid in choosing the best option for your classroom.

Converting the EDU-MINT2(/M) kit to enable the demonstrations outlined in the EDU-BT1(/M) manual is simple; only a photodetector and the necessary mounting hardware are needed.

Safe practices and proper usage of safety equipment should be taken into consideration when operating lasers. The eye is susceptible to injury, even from very low levels of laser light. Thorlabs offers a range of laser safety accessories that can be used to reduce the risk of accidents or injuries. Laser emission in the visible and near infrared spectral ranges has the greatest potential for retinal injury, as the cornea and lens are transparent to those wavelengths, and the lens can focus the laser energy onto the retina.

Lasers are categorized into different classes according to their ability to cause eye and other damage. The International Electrotechnical Commission (IEC) is a global organization that prepares and publishes international standards for all electrical, electronic, and related technologies. The IEC document 60825-1 outlines the safety of laser products. A description of each class of laser is given below: