Overview
When purchasing a camera, an important consideration is whether or not the application will require a cooled sensor. Generally, most applications have high signal levels and do not require cooling. However, for certain situations, generally under low light levels where long exposures are necessary, cooling will provide a benefit. In the tutorial below, we derive the following "rule of thumb": for exposures less than 1 second, a standard camera is generally sufficient; for exposures greater than 1 second, cooling could be beneficial; for exposures greater than 5 seconds, cooling is generally recommended; and for exposures above 10 seconds, cooling is usually required. If you have questions about which domain your application will fall, you might consider estimating the signal levels and noise sources by following the steps detailed in the tutorial below, where we present sample calculations using the specifications for our 1.4 megapixel cameras. Alternatively you can contact us, and one of our scientific camera specialists will help you decide which camera is right for you.

Noise in a camera image is the aggregate spatial and temporal variation in the measured signal, assuming constant, uniform illumination. There are several components of noise:

The total effective noise per pixel is the quadrature sum of each of the noise sources listed above:

Here, σD is the dark shot noise, σR is the read noise (for sample calculations, we will use our 1.4 megapixel cameras, which use the ICX285AL sensor. Typically the read noise is less than 10 e- for scientific-grade cameras using the ICX285AL CCD; we will assume a value of 10 e- in this tutorial), and σS is the photon shot noise. If σS>>σD and σS>>σR, then σeff is approximately given by the following:

Click to Enlarge
Figure 1: Plot of dark shot noise and read noise as a function of exposure for three sensor temperatures for a sample camera. This plot uses logarithmic scales for both axes.The dotted vertical line at 5 s indicates the values calculated as the example in the text.

Since the dark current decreases with decreasing temperature, the associated noise can be decreased by cooling the camera. For example, assuming an exposure of 5 seconds, the dark shot noise levels for the three sensor temperatures listed in the table are

If the photon shot noise is significantly larger than the dark shot noise, then cooling provides a negligible benefit in terms of the noise, and our standard package cameras will work well.

If S is the number of "signal" electrons generated when a photon flux of N photons/second is incident on each pixel of a sensor with a quantum efficiency QE and an exposure duration of t seconds, then

From S, the photon shot noise, σS, is given by:

If we assume that there is a sufficiently high photon flux and quantum efficiency to allow for a signal S of 10,000 e- to accumulate in a pixel with an exposure of 5 seconds, then the estimated shot noise, σS, would be the square root of 10,000, or 100 e-. The read noise is 10 e- (independent of exposure time). For an exposure of 5 seconds and sensor temperatures of 25, 0, and -25 °C, the dark shot noise is given in equation (4). The effective noise is:

The signal-to-noise ratio (SNR) is a useful figure of merit for image quality and is estimated as:

From Equation 7, the SNR values for the three sensor temperatures are:

As the example shows, there is a negligible benefit to using a cooled camera compared to a non-cooled camera operating at room temperature, and the photon shot noise is the dominant noise source in this example. In this case our standard package cameras should therefore work quite well.

From Equation 8, the SNR values are 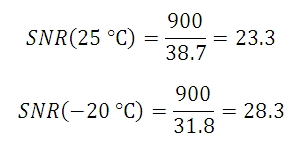 Table 2: From the results shown in Figure 1, these are the general "rule of thumb" recommendations related to colling considerations based on the exposure requirements of an application. Please keep in mind that some applications are more sensitive to noise than others.

In this example, the dark shot noise is a more significant contributor to the total noise for the 25 °C sensor than for the -25 °C sensor. Depending on the application's noise budget, a cooled camera may be beneficial.

Figure 2 shows plots of the different noise components, including dark shot noise at three sensor temperatures, as a function of exposure time for three photon fluxes. The plots show that dark shot noise is not a significant contributor to total noise except for low signal (and consequently long exposure) situations. While the photon flux levels used for the calculations are given in the figure, it is not necessary to know the exact photon flux level for your application. Figure 2 suggests a general metric based on exposure time that can be used to determine whether a cooled camera is required if the exposure time can be estimated, and these results are summarized in Table 2. If you find that your dominant source of noise is due to the read noise, then we recommend running the camera at a lower CCD pixel clock rate of 20 MHz, since that will offer a lower read noise.

Figure 2: Noise from all sources as a function of exposure for three different photon fluxes: (a) low, (b) medium, and (c) high. In (c) the signal and photon shot noise saturate above approximately 20 seconds because the pixel becomes saturated at the corresponding incident photon levels. A quantum efficiency of 60% was used for the calculations. Note that these plots use logarithmic scales for both axes.

Thermoelectric cooling should also be considered for long exposures even where the dark shot noise is not a significant contributor to total noise because cooling also helps to reduce the effects of hot pixels. Hot pixels cause a "star field" pattern that appears under long exposures. Figure 3 shows an example of this star field pattern for images taken using cameras with and without TEC cooling with an exposure of 10 seconds. 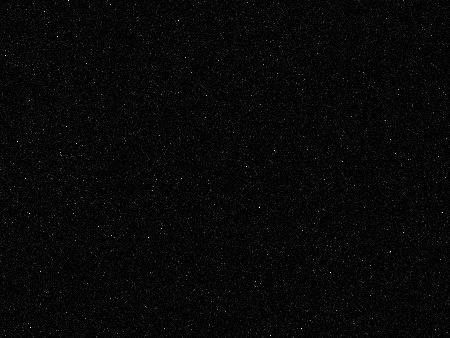 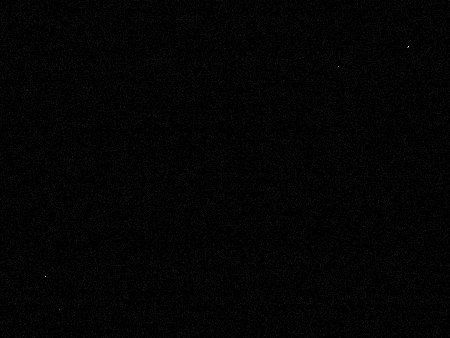 Figure 3: Images of the "star field" pattern that results from hot pixels using our (a) standard non-cooled camera and (b) our camera cooled to -20 °C. Both images were taken with an exposure of 10 seconds and with a gain of 32 dB (to make the hot pixels more visible). Please note that in order to show the pattern the images displayed here were cropped from the full-resolution 16 bit images. The full size 16 bit images may be downloaded here and viewed with software such as ImageJ, which is a free download.