The DC20 is designed to provide easy plug-and-play operation for Thorlabs’
Solis LEDs. 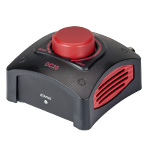 Thorlabs' DC20 Driver is designed to provide a simple way to control any of Thorlabs' Solis LEDs. Easy to set up and use, this driver is an ideal solution for users of our Solis LEDs who don't require the more advanced functions provided by the DC2200 Touchscreen LED Driver. See the Solis LED Drivers tab for a comparison between the DC20 and the DC2200 drivers.

The current provided to the LED is controlled by turning the knob on the top of the driver. The position on the top panel marked LIMIT will correspond to the maximum LED current for the connected Solis LED, as the driver automatically detects and sets the current limit to the value stored in each Solis LED's internal memory to protect it from being overdriven. Pushing on the knob will either switch the LED on at the percentage of the maximum current indicated by the control knob position or turn it off. Alternatively, the LED can be modulated using an external TTL signal connected to a BNC input on the back of the driver's housing. See the Specs tab for the TTL signal requirements.

Please note that the DC20 driver is designed specifically to work with the internal electronics in Thorlabs' Solis LEDs and should not be used to drive any other type of LED.

Thorlabs also offers other LEDs drivers that are compatible with our mounted, collimated, fiber-coupled, and PCB-mounted LEDs. See the table below for available LED driver options. 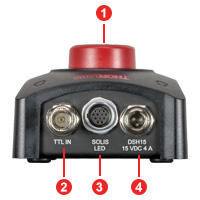 Click to Enlarge
Connectors and Control Knob on the DC20 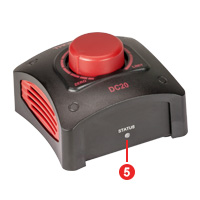 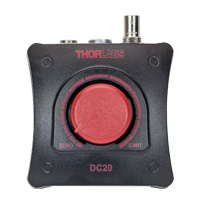 The DC20 Driver is only intended for use with Thorlabs' Solis LEDs, so this pin diagram is provided for reference only.

The following items are included in the DC20 package:

Thorlabs offers two options for driving our Solis® LEDs. The DC20 is a basic option that allows users to control the intensity of their LED using a control knob on the top or via an external TTL signal for modulation. For more advanced applications, our DC2200 drivers provides a touchscreen interface that allows users to control the LED current, select internal or external modulation modes, and more. The table below provides a comparison of key controller features.