A second-order correlation measurement [g(2)(τ)] between signal and idler photons. The peak at τ = 0 confirms the generation of photon pairs. Data is taken at 35 mW.

Thorlabs' Correlated Photon-Pair Source uses spontaneous parametric down-conversion (SPDC) to create a pair of energy-time entangled photons at 810 nm. With an integrated 405 nm pump laser, this self-contained source results in >450 kHz photon pairs per second and a high-efficiency heralding ratio of >0.45. A zero-time delay second-order correlation function [g(2) (τ = 0)] value of <0.1 can be achieved with this source, making it a high-brightness heralded single-photon source ideal for quantum optics applications. For complete performance specifications, please see the Specs tab; note that the heralding ratio, pair rate, and g(2)(0) values are given for the pump laser operating at 35 mW and the observed statistics will vary with the pump power and detector specifications.

In this SPDC source, a nonlinear crystal [periodically poled potassium titanyl phosphate (PPKTP)] converts one 405 nm pump photon into two 810 nm photons (the signal and idler) in a single event. The resulting signal and idler photons have type-II phase matching, which means they propagate with orthogonal polarizations (extraordinary and ordinary); see the schematics to the right. As a source that emits photon-pairs in a simultaneous event, it can be used as a heralded single-photon source. This is when the detection of one photon (idler) heralds the presence of the second photon (signal). More information about single-photon verification can be found in the Single-Photon Output tab. 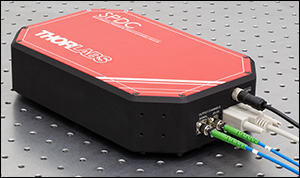 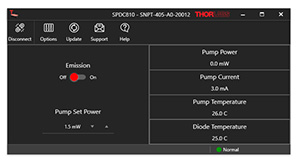 Click to Enlarge
The SPDC810 software provides a simple GUI, which automatically identifies connected SPDC810s and allows control of the pump power and emission. The GUI also displays the measured pump power, current, and temperatures, allowing the user to check the state of the device at a glance.

The photon-pair source contains an oven to maintain the temperature of the nonlinear crystal and the wavelength of the down-converted photons, resulting in a wavelength stability of ±2.5 nm. For adequate cooling, the unit requires 1" of clearance on all sides.

This SPDC source is factory-aligned and ready to use. If misalignment occurs but signal is still detected, X- and Y-axis adjustments to the internal mirrors can be made through the access holes in the side of the housing; see the manual for details. The internal adjusters accept a 5/64" or 2 mm balldriver (not included). Please contact applications@thorlabs.com if no signal is detected.

The unit is shipped with a 12 V power supply with an M8 connector and an RS232 cable for operating the pump laser. For more information about these connectors, please see the Pin Diagrams tab.

The SPDC810 software package, which includes a GUI for control of the SPDC810 Correlated Photon-Pair Source. 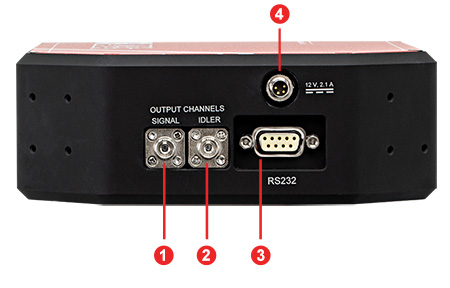 Click to Enlarge
Figure 1: Experimental setup for testing single-photon generation. APD-h is the avalanche photodiodes for the heralded photons, while APD-1 and APD-2 are the ones for the signal photons. TCSPC is the time-correlated single-photon counter.

One of the most important characteristics of any single-photon source is the degree to which its output consists of only single photons. It is not enough to be able to detect a signal using single photon detectors, which can be easily achieved by attenuating a classical light source. Also, the output of a true single photon source may be contaminated with additional light due to leakage or multiphoton events. Therefore, while a coincidence peak can confirm the presence of single photons, it provides little information about the present noise. Please note that throughout this discussion, singles refers to a single detection event on one channel, ideally half of the photon pair.

Thorlabs' SPDC810 Photon-Pair Source is based on spontaneous parametric down-conversion (SPDC) and, thus, generates a pair of photons at any moment in time. An experimental setup to verify its single­-photon operation is shown in Figure 1. One of the outputs is connected directly to a single-photon detector, which in this case is a single-photon avalanche photodiode (APD). This channel is often referred to as a heralding or trigger channel, as it confirms the existence of a photon in the other arm. The signal channel is split on a 50:50 beamsplitter in a Hanbury-Brown-Twiss configuration and is connected to detectors 1 and 2. All 3 detectors are then connected to a coincidence counter, which is a time-correlated single-photon counter (TCSPC). If the output of the source truly consists only of photon pairs, there will only be two-fold coincidences between the heralding detector and detector 1 or 2, which are Ch,1 and Ch,2 respectively. This is demonstrated in Figure 2. Three-fold coincidences between all three detectors Ch,1,2 should not occur, as there are only two photons present.

Click to Enlarge
Figure 2: Coincidence Histogram for Ch,1 and Ch,2, which are the coincidences between APD-h and APD-1 or -2, respectively. The peak at 50 ns confirms pair emission; a heralding photon reaches APD-h and 50 ns later (an added time delay) a signal photon reaches APD-1 or APD-2. Data acquired using Thorlabs' SPDC810 Photon-Pair Source.

Example data obtained using the SPDC810 photon-pair source is presented in Table 1. As expected, the singles are split according to the beamsplitter reflectance. In this case, the additional loss was due to fiber­-to-fiber coupling. The same is true for coincidences Ch,1 and Ch,2, which are similarly distributed between the two detectors. However, three-fold coincidences Ch,1,2 are very close to 0. The results confirm the true single­-photon output of the source. In addition, the experiment also confirms the particle nature of light, i.e., a photon cannot be split.

The measurement described above is often referred to as a heralded second-order intensity correlation gh(2)(τ), where τ is the time difference between the arrival times t1 and t2. At τ = 0, which is our point of interest, it can be quantified using the following formula:

For an ideal photon pair source, the conditional probability of detecting photons at both detectors 1 and 2 at the same time (τ=0), given that a photon is detected at the heralding detector, is 0. Based on the data shown in Table 1 and using equation 1, we obtain gh(2)(0) = 0.004, which is very close to ideal performance. In addition, the second order intensity correlation has a more fundamental importance. It is used to prove the non-classical nature of light, as the value of g(2)(0) depends on the type of light being investigated:

Depending on the experimental configuration, photon pair sources can exhibit both bunched and antibunched light statistics. Thermal light is a typical example of bunched light, where the probability of photons being detected across the outputs of a beamsplitter increases for τ ≈ 0, peaking at τ = 0. In contrast, an ideal single photon source exhibits antibunching, as discussed earlier. However, if a g(2)(τ) measurement is performed only on one of the channels, with the other one ignored, then such a source will produce thermal statistics.

The RS232 connector provides connection to the pump laser.

This tab details techniques for cleaning fiber bulkheads and connectors using the items on this page. 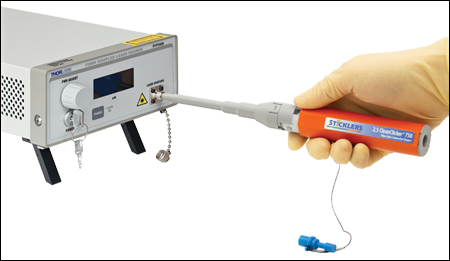 Click to Enlarge
To clean a 2.5 mm fiber bulkhead with a FBC250 cleaner, remove the guide cap completely from the device, and insert the tip of the cleaner into the bulkhead. Rotate the cleaner handle from the LOCK position to the CLEAN position, and then carefully push the handle toward the bulkhead to advance the cleaning string that cleans the connector. A click indicates that the cleaning is complete. To clean a 2.5 mm SC, ST, FC, or ES200 fiber connector, expose just the top of the guide cap, insert the tip of the FBC250 cleaner into the connector and proceed with the same steps. 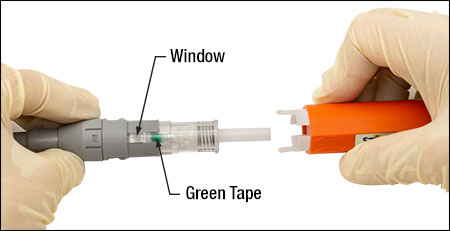 Click to Enlarge
A new cartridge is shown being installed. The cartridge will need to be replaced when the green tape appears in the indicator window. To remove the cartridge in the FBC250 cleaner, remove the guide cap completely and detach the old cartridge by firmly pulling it away from the handle. Perform this last step with care.