The wire leads on the PQ9FC1 piezo stack are approximately 75 mm long.

Piezo Chip with Through Hole

Thorlabs' Single-Piezoelectric-Crystal Chips and Piezoelectric-Crystal Stacks are fabricated from lead-based crystals that exhibit highly linear movement with low hysteresis and creep, making these devices well-suited for open loop applications or operation without position control. Electrodes are printed on the top and bottom of each crystal. Single-crystal chips are offered with bare electrodes or with pre-attached copper foil leads. The discrete stack consists of multiple single-crystal chips and copper plates bonded together with epoxy, with wire leads linking the electrodes in the stack. The PQ91JKP3 chip and PQ9FC1 stack come with pre-attached flat ceramic end plates.

To accommodate a variety of loading conditions, additional flat ceramic or hemispherical ceramic endplates may be purchased as accessories for these chips. In addition, Thorlabs offers conical end cups, which are compatible with ball contacts possessing diameters of 3.0 mm and 5.0 mm. Please see the Operation tab for information on interfacing piezoelectric actuators with loads, special operational considerations, and data that will allow the lifetimes of these actuators to be estimated when their operational conditions are known.

Single-crystal piezoelectric chips with custom dimensions are available. Vacuum-compatible chips and stacks can also be custom ordered. Please contact Tech Support for more information. To browse our catalog offering of piezoelectric devices, see the selection guide to the right.

Soldering Wire Leads to the Electrodes
If wire leads must be attached or reattached to the electrodes, a soldering temperature no higher than 370 °C (700 °F) should be used, and heat should be applied to each electrode for a maximum of 2 seconds. Solder the lead to the middle of the electrode and keep the region over which heat is applied as small as possible.

Interfacing a Piezoelectric Element with a Load
Piezoceramics are brittle and have low tensile strength. Avoid loading conditions that subject the actuator to lateral, transverse, or bending forces. When applied incorrectly, an external load that may appear to be compressive can, through bending moments, cause high tensile stresses within the piezoelectric device. Improperly mounting a load to the piezoelectric actuator can easily result in internal stresses that will damage the actuator. To avoid this, the piezoelectric actuator should be interfaced with an external load such that the induced force is directed along the actuator's axis of displacement. The load should be centered on and applied uniformly over as much of the actuator's mounting surface as possible. When interfacing the flat surface of a load with an actuator capped with a flat mounting surface, ensure the two surfaces are highly flat and smooth and that there is good parallelism between the two when they are mated. If the external load is directed at an angle to the actuator's axis of displacement, use an actuator fitted with a hemispherical end plate or a flexure joint to achieve safe loading of the piezoelectric element.

To accommodate a variety of loading conditions, flat ceramic or hemispherical ceramic end plates may be purchased as accessories for these chips. In addition, Thorlabs offers Conical End Cups which feature concave surfaces that can interface with Ø1.5 mm to Ø7.0 mm hemispherical or curved contacts. To attach a load to the piezo chip, we recommend using an epoxy that cures at a temperature lower than 80 °C (176 °F), such as our 353NDPK or TS10 epoxies or Loctite® Hysol® 9340. Loads should be mounted only to the faces of the piezoelectric chip that translate. Mounting a load to a non-translating face may lead to the mechanical failure of the actuator. Some correct and incorrect approaches to interfacing loads with piezoelectric actuators capped with both kinds of end plates are discussed in the following.

Click to Enlarge
Actuation of a lever arm using a piezo element fitted with a flat plate (A, Incorrect), and a hemispherical plate (B, Correct).

The image at left presents incorrect (A, far-left) and correct (B, near-left) methods for using a piezoelectric element to actuate a lever arm. The correct method uses a hemispherical end plate so that, regardless of the angle of the lever arm, the force exerted is always directed along the translational axis of the actuator. The incorrect interfacing of the element and the lever arm, shown at far-left, endangers the piezo element by applying the full force of the load to one edge of the element. This uneven loading causes dangerous stresses in the actuator, including a bending moment around the base.

The image at right shows one incorrect (near-right, A) and three correct approaches for interfacing a flat-bottomed, off-axis load with a piezoelectric actuator. Approaches A and B are similar to the incorrect and correct approaches, respectively, shown in the image at left. Correct approach C shows a conical end cup, such as the PKFCUP, acting as an interface. The flat surface is affixed to the mating surface of the load, and the concave surface fits over the hemispherical dome of the end plate. In the case of correct approach D, a flexure mount acts as an interface between the off-axis flat mounting surface of the load and the flat mounting plate of the actuator. The flexure mount ensures that the load is both uniformly distributed over the surface plate of the actuator and that the loading force is directed along the translational axis of the actuator.

, below. The temperature of the device should not be allowed to exceed its specified maximum operating temperature.

Quick changes in the applied voltage result in fast dimensional changes to the piezoelectric chip. The magnitude of the applied voltage determines the nominal extension of the chip. Assuming the driving voltage signal resembles a step function, the minimum time, Tmin, required for the length of the actuator to transition between its initial and final values is approximately 1/3 the period of resonant frequency. If there is no load applied to the piezoelectric actuator, its resonant frequency is ƒo and its minimum response time is:

Estimating Device Lifetime for DC Drive Voltage Conditions
The lifetime of a piezoelectric device is a function of the operating temperature, applied voltage, and relative humidity conditions. Lifetimes are reduced as a consequence of humidity-driven electrolytic reactions, which occur at the electrodes of the piezoelectric devices when a DC voltage is applied. These reactions both generate hydrogen and result in metal dendrites growing from the cathode towards the anode. The hydrogen liberated by the electrolytic reaction chemically reacts with and degrades the piezoelectric material. Dendrites that grow to electrically connect the cathode and anode result in increasing levels of leakage current. Failed piezoelectric devices are defined as those that exhibit leakage current levels above an established threshold.

A ceramic moisture-barrier layer that insulates Thorlabs' piezoelectric devices on four sides is effective in minimizing the effects of humidity on device lifetime. As there is interest in estimating the lifetime of piezoelectric devices, Thorlabs conducted environmental testing on our ceramic-insulated, low-voltage, piezoelectric actuators. The resulting data were used to create a simple model that estimates the mean time to failure (MTTF), in hours, when the operating conditions of humidity, temperature, and applied voltage are known. The estimated MTTF is calculated by multiplying together three factors that correspond, respectively, to the operational temperature, relative humidity, and fractional voltage of the device. The fractional voltage is calculated by dividing the operational voltage by the maximum specified drive voltage for the device. The factors for each parameter can be read from the following plots, or they may be calculated by downloading the plotted data values and interpolating as appropriate.

The data used to generate these temperature, voltage, and humidity factor plots resulted from the analysis of measurements obtained from testing devices under six different operational conditions. Different dedicated sets of ten devices were tested under each condition, with each condition representing a different combination of operational voltage, device temperature, and relative humidity. After devices exhibit leakage current levels above a threshold of 100 nA, they are registered as having failed. The individual contributions of temperature, humidity, and voltage to the lifetime are determined by assuming:

where A1, A2, A3, b1, b2, and c are constants determined through analysis of the measurement data, V is the DC operational voltage, T is the device temperature, and H is the relative humidity. Because the MTTF has a different mathematical relationship with each factor, the dependence of the MTTF on each factor alone may be determined. These are the data plotted above. The regions of the above curves marked by the blue shading are derived from experimental data. The dotted regions of the curves are extrapolated.

Lifetime testing of these devices continues, and additional data will be published here as they become available. To assist in temperature control, please see our selection of thermoelectric coolers. Temperature and humidity can be monitored using our USB Temperature and Humidity Logger. 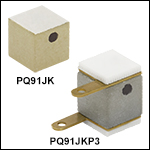 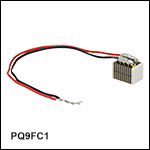 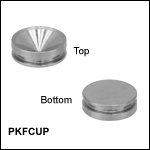 The PKJCUP and PKFCUP 416 stainless steel conical end cups are designed to be used with our piezoelectric chips and stacks when interfaced with the end hemispheres sold below. The conical cup can accept a ball contact with a diameter from 1.5 to 3.0 mm (PKJCUP) or 2.6 to 5.0 mm (PKFCUP). Using a ball contact with a piezo actuator ensures that the applied stress is restricted to the axial direction, limiting the probability of stress-induced failure. They can be affixed either to a flat face of a piezo chip or to the mechanical device that is being actuated. If affixing a cup to a chip or stack, we recommend using an epoxy that cures at a temperature lower than 80 °C (176 °F), such as 353NDPK or TS10 epoxies or Loctite® Hysol® 9340. End cups may be affixed in a similar manner to flat end plates. 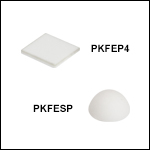