The VCFL35(/M) Voice Coil Flexure Scanner provides fast, smooth motion of a Ø1/2" (Ø12.7 mm) optical element over the recommended range of 3.5 mm (±1.75 mm from flexure neutral) at frequencies up to 30 Hz with a 3.5 g mounted optic. Rapid acceleration in the range of 40 m/s2 is achievable, allowing for shorter travel ranges at higher frequencies. Rubber stops limit the full range of travel to ±2.3 mm.

The scanner consists of a stage that supports a VC063/M voice coil actuator between two flexures. Flexure bending is nearly frictionless, so that the resulting motion is smoother than many other types of bearings. Optics may be mounted on the front of the stage via a side optic retention mount using a 0.05" (1.3 mm) hex key. This mirror mount features a patented optic bore design with a monolithic flexure arm to hold the optic. Applying a voltage (up to 3.1 VRMS) to the female MMCX input connector results in a current through the voice coil, which drives the motion of the stage. Please see the Specs tab for full scanner specifications and the Operation Features tab for drawings describing mounting and electrical connections.

The smooth, fast, predictable motion of the VCFL35(/M) scanner is ideal for low- to mid-resolution interferometry, laser delay lines, and beam displacement applications. The path is approximately rectilinear, with a vertical runout that reaches about 90 µm at either extreme of travel. The vertical runout is nearly parabolic with respect to displacement in the scan axis. While the tilt of the optic is small, it is not zero and varies from unit to unit. The scanner is therefore best suited to interferometer designs that are tilt- and shear-compensated with the use of retroreflectors.

The VCFL35(/M) scanner may be operated open loop using a standard waveform generator with a variety of waveforms. Detailed information about open-loop performance for a Michelson interferometer example with various driving waveforms is given in the Application tab, including links to the driving waveform used for the application presented. Integrating the flexure scanner with user-designed systems to enable closed-loop control is also possible; see the Applications tab and the manual for more information. The Graphs tab provides additional performance information.

For complete mechanical drawings, click on the red Docs icon (

) next to the part numbers below.

To mount the optic in the front of the scanner, hold the moving platform in place and tighten the locking set screw using a 0.050" (1.3 mm) balldriver or hex key. The recommended optic mounting torque is 8 oz-in for Ø12.7 mm (+0/-0.1 mm) optics. 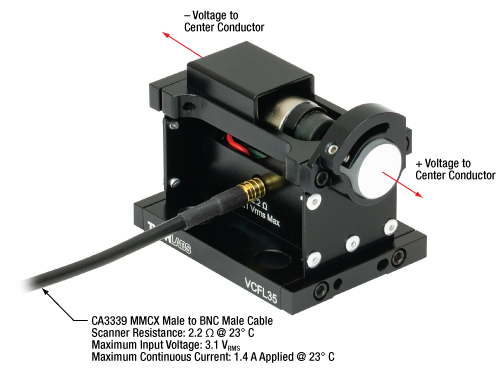 Click to Enlarge
Connect the VCFL35(/M) scanner to any suitable waveform generator or controller. Please see the Application tab for examples of performance for various driving conditions. The input connector to the scanner is electrically insulated from aluminum housing.

These graphs show the Bode plot of the velocity transfer function. The top graph in the Bode plot describes the amplitude of the response while the bottom graph describes the phase. The velocity increases with frequency, up to the first resonance. The efficient recycling of energy at the resonance causes a significant increase in velocity at, and near, the resonance. After the first resonance there is a roll off in magnitude with respect to increasing frequency.

Click to Enlarge
Click Here for Data
Because the magnetic field intensity is not perfectly uniform, and the overlap of the coil to the field also varies with position, the voice coil actuator within the VCFL35(/M) scanner will produce a slightly different force as a function of current depending on its position in the magnetic field. At either scan extreme (the recommended ±1.75 mm from the neutral position), the force constant will decrease by about 10%.

Click to Enlarge
Click Here for Data
The maximum scan displacement from flexure neutral when driving the VCFL35(/M) scanner directly with a waveform generator is plotted above. This graph shows the first resonance of the device around 14 Hz. Note, the displacement of the scanner is limited by rubber soft stops to prevent movement greater than ±2.3 mm. 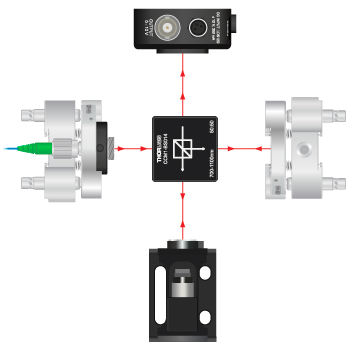 We present here an example of the VCFL35(/M) Voice Coil Flexure Scanner in a standard Michelson interferometer configuration to demonstrate the operation of the scanner for various driving conditions.

Michelson Interferometer System
The VCFL35(/M) scanner may be configured to scan the moving arm of a standard Michelson interferometer. A diagram of a suitable optical setup, which was constructed on a vibration-isolated optical table, is shown in the figure at the right. While not used for the results presented in this example, Thorlabs' optical enclosures should be placed over interferometers when stringent isolation from environmental disturbances is required, particularly for position control. In addition, either a signal generator or PID controller is required to drive the VCFL35(/M) scanner, in open-loop or closed-loop operation, respectively.

The light source for the Michelson interferometer shown in the figure at right is an FPV785P 785 nm VHG Wavelength-Stabilized Single Frequency Laser Diode collimated using an F220APC-780 Fiber Collimation Package. A CCM1-BS014 Cage Cube-Mounted Non-Polarizing Beamsplitter is used to divide the laser beam into two perpendicular beams, each containing nominally 50% of the original intensity. One beam reflects from a fixed flat mirror (Item# PF10-03-P01) and the other reflects from a PF05-03-P01 flat mirror mounted to the moving stage of the VCFL35(/M) scanner. The beams are reflected back to the beamsplitter, where they both are split again.

One of the resulting recombined beams passes to the PDA100A2 detector, which measures the intensity. The other recombined beam returns in the direction of the laser source and is lost. The PDA100A2 detector measures the intensity of the recombined beam, which changes with the optical path difference of each arm. The detector output data is sent through an ADC (analog-to-digital converter) and split into small time increments. The number of fringes per time increment is used to calculate the velocity of the scanner.

Open-Loop Operation
For open-loop operation, the VCFL35(/M) scanner may be driven with any waveform within the operating power limits. Depending on the application, the input signals most likely to be useful will be tailored to optimize the motion along a repeating trajectory. For sinusoidal waveforms, the amplitude need only be scaled correctly for the response of the scanner at the desired frequency. In some cases, such as FT-IR spectrometers, a more desirable motion profile will closely resemble a triangular waveform that exhibits constant velocity in both directions with quick turnarounds.

A detailed discussion of the resonance behavior of the flexure scanner is described in the manual. The Specs tab contains resonance information for different loads, and the Graphs tab shows performance at the resonance frequency. There is a large increase in amplitude response at the fundamental resonance, and so it is important to tailor the waveforms to not excite the resonance mode. Purely triangular waveforms are comprised of a series of harmonics that can include the fundamental resonance of the VCFL35(/M) scanner. This will result in poor velocity stability and unintentional turnarounds.

The figure at the right shows a purely triangular waveform used to drive the VCFL35(/M) scanner in the Michelson interferometer system described above, along with the resulting velocity characteristics of a single scan, from one extreme to the other (3.5 mm travel). The shaded region of the triangle waveform is the section of the waveform for which the velocity of the scanner is shown.

If energy that would excite the fundamental resonance of the VCFL35(/M) scanner is removed, the resulting motion will better follow the desired trajectory and velocity stability will greatly improve. This energy can be removed by simply filtering the triangular waveform, which will round the sharp peaks that exist at each turnaround.

For this demonstration, a simple moving average filter was used. The greater the filter window length, the smoother the turnarounds will become. Fundamentally, smoothing of the turnarounds results in more time spent executing turnarounds and less time spent at nominally constant velocity. A variety of window lengths were tested and a balance between stability and duty cycle efficiency was chosen at a window length of 7.5% of the sampling frequency.

Closed-Loop Operation
Further improvement in velocity stability may be obtained with the use of closed-loop control. Traditional methods for closed-loop position and velocity control often employ optical or magnetic encoders with motion controllers. However, interferometric signals intrinsically provide better velocity and position information than traditional encoders, so this method is used here to demonstrate the performance that can be achieved with the VCFL35(/M) scanner in closed-loop operation with interferometric feedback.

The open-loop operation velocity versus time results, measured using the simple Michelson interferometer pictured in the upper right of this tab, were obtained by post-processing the digitized output of the PDA100A2 detector. If this output is processed to calculate fringe rate, and thereby velocity, in real-time, the PDA100A2 detector output can be used to generate feedback for a closed-loop control system, such as a PID controller.

Such a closed-loop control system was implemented for the VCFL35(/M) scanner in the same Michelson interferometer. The velocity stability of the scanner in this closed-loop system is shown in the figure to the right. For the center 65% of the scan, the velocity stability is 1.4%, and this was repeatable for multiple units tested. Closed-loop performance provides significantly improved velocity stability when compared to open-loop operation; however, it is more difficult to engineer and requires at least a few additional components. Closed-loop control of position can also be implemented using the same hardware with a slight modification of the feedback signals. More information on this closed-loop operation example can be found in the VCFL35(/M) manual.