Click Here for Raw Data File
The retardance data above illustrates the relatively wavelength-independent design of these rhombs for the specified wavelength range.

Fresnel Rhomb Retarders act like broadband waveplates providing uniform λ/4 or λ/2 retardance over a wider range of wavelengths than possible with birefringent waveplates. They can replace retardation plates for broadband, multi-line or tunable laser sources.

The rhomb is designed so that a 45° phase shift occurs at each internal reflection creating a total retardance of λ/4. Because the phase shift is a function of the slowly varying rhomb dispersion, the retardance change with wavelength is much lower than other types of retarders. The half wave retarder combines two quarter wave rhombs. These mounted versions are engraved with the part number and are SM1-threaded, allowing for easy installation using Thorlabs rotation mounts like the RSP1 and PRM1. 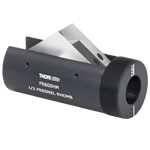 Click to Enlarge
Beam path shown in blue. To achieve an output polarization that is rotated with respect to the initial polarization, the input polarization must not be aligned with the fast or slow axis.
Mounted Quarter-Wave Fresnel Rhomb Retarder

Click to Enlarge
Beam path shown in blue. To achieve circular output polarization, the beam must have an initial polarization that is 45° from the fast axis, engraved on the retarder.