Thorlabs' collimated LED assemblies can be easily connected to standard and epi-illumination ports on most readily available commercial microscopes, including Olympus, Leica, Nikon, and Zeiss. Each collimated LED consists of a mounted LED and a lamphouse-port-compatible housing that contains an AR-coated aspheric collimation optic (see the Specs tab for details). If the wavelength or output power you require is not sold on this page, our mounted LEDs and Solis® High-Power LEDs are available in additional wavelengths and output powers.

Note: Please ensure your microscope is configured to directly accept an external light source. Some microscope assemblies have a permanently installed illuminator or may be otherwise incompatible with the LED light sources below.

The collimation of the beam can be adjusted by changing the position of the aspheric lens with respect to the LED. Interchanging LEDs is easy; simply unscrew one LED from the housing and replace it with a different mounted LED (sold separately). We also offer collimation packages, which can be purchased separately from these LEDs.

Like our mounted LEDs, the package of these collimated LEDs is in direct contact with the heat sink to provide excellent thermal management. This minimizes the degradation of optical output power caused by increased LED temperatures. Please see the Stability tab for information on the stable output intensity of these collimated LEDs. Additionally, our M365LP1, M385LP1, and M405LP1 LEDs feature a higher power output and are mounted to a larger Ø57.0 mm heat sink to increase heat dissipation and thermal stability.

For microscope applications requiring compatibility with SM1 (1.035"-40) threading, our mounted LEDs (sold separately) can be collimated using a Ø1" lens and lens tubes. This collimation method also allows for a smaller beam size than the collimators on this page. Please see the Collimation tab on our Mounted LEDs presentation for a detailed item list and instructions.

Compatible Controllers
Information concerning compatible controllers is provided on the LED Drivers tab. If the LED is driven with a DC2200, DC4100, or DC4104 controller, the integrated EEPROM chip will identify the LED and allow the controller to automatically set the proper current limit to protect the LED from being overdriven. The DC4100 and DC4104 require the DC4100-HUB when used with these LEDs.

The section of the housing that holds the collimation optics is the same size for all LEDs that share the same item # suffix, regardless of the size of the heat sink.

The section of the housing that holds the collimation optics is the same size for all LEDs that share the same item # suffix, regardless of the size of the heat sink.

The actual spectral output and total output power of any given LED will vary due to variations in the manufacturing process and operating parameters, such as temperature and current. The typical total beam power of each collimated LED is specified to help you select an LED that suits your needs. In order to provide a point of comparison for the relative powers of LEDs with different nominal wavelengths, the spectra in the plots below have been scaled to the typical total beam power of each collimated LED. This data is representative, not absolute. An Excel file containing the normalized and scaled spectra for each collimation package can be downloaded using the link below each plot.

The thermal dissipation performance of these collimated LEDs has been optimized for stable power output. The heat sink is directly mounted to the LED mount so as to provide optimal thermal contact. By doing so, the degradation of optical output power that can be attributed to increased LED junction temperature is minimized (see the graph to the right).

The diagram to the right shows the male connector of the collimated LED assembly. It is a standard M8 x 1 sensor circular connector. Pins 1 and 2 are the connection to the LED. Pin 3 and 4 are used for the internal EEPROM in these LEDs. If using an LED driver that was not purchased from Thorlabs, be careful that the appropriate connections are made to Pin 1 and Pin 2 and that you do not attempt to drive the LED through the EEPROM pins. 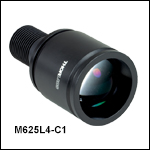 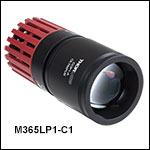 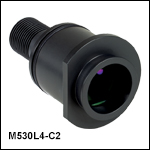 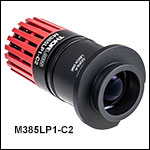 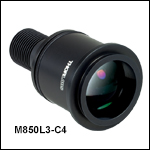 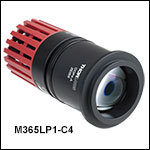 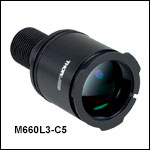 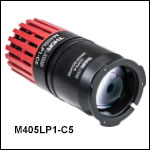 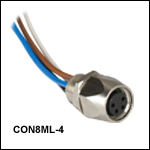 The CON8ML-4 connector can be used to mate mounted LEDs featured on this page to user-supplied power supplies. We also offer a male 4-Pin M8 connector cable (item # CAB-LEDD1).