Thorlabs' PDB570C Avalanche-Photodiode-Based Balanced Detector is a balanced receiver that subtracts the two input signals from each other, resulting in the cancellation of common mode noise. The balanced detector, which uses two well-matched avalanche photodiodes (APDs) and an ultra-low-noise, ultra-low-distortion, high-speed transimpedance amplifier, is optimized for applications with low optical input powers (minimum NEP of 1.0 pW/√Hz). Each avalanche photodiode is fiber coupled to the FC/APC outputs via length-matched SMF-28e+ fibers so as not to introduce optical path differences between the input and the active area of the photodiode. Compared to our other balanced detectors that use Si or InGaAs PIN photodiodes, the PDB570C offers unique features such as exceptionally low NEP, optical gain control, and an auto-balancing function with a variable closed-loop control velocity.

This balanced detector features an adjustable gain and three different detection modes: single detector, balanced (BAL), and auto-balanced (AUTO-BAL). The single detector mode allows the output of each photodiode to be measured individually. In the BAL mode, the PDB570C functions as a standard balanced detector while allowing the optical gain of both photodiodes to be simultaneously adjusted. In the AUTO-BAL mode, the balanced detector compensates for power differences between the two optical input signals that vary at a slower rate than a cutoff frequency set via the CONTROL VELOCITY knob. This power difference can be monitored via the CONTROL OUTPUT and will not contribute to the voltage generated by the balanced detector at the RF output. For details on how to operate the PDB570C, please see the Detector Operation tab.

While the PDB570C is intended for fiber-coupled applications, a free-space beam can be coupled into the FC/APC inputs via a pigtailed aspheric collimator. Care should be taken to length-match the fibers between the collimator and the inputs in an attempt to avoid introducing unwanted path length differences into the system. Thorlabs also offers balanced detectors designed for free-space applications. Additionally, some of our fiber-coupled balanced detectors with fast monitor outputs have removable FC/APC detectors for easy integration into free-space applications.

Click to Enlarge
The blue-shaded regions indicate the specified 1200 - 1700 nm operating wavelength range of the PDB570C APD balanced detector. Optimal performance is obtained for wavelengths between 1260 nm and 1625 nm, which is denoted by the darker blue shaded region; this optimized region is narrower due to the optical properties of the SMF-28e+ fiber used to couple the photodiodes to the inputs. The fiber pigtails may introduce additional insertion loss outside of this range and transmit multi-modal light below the fiber's 1240 nm cutoff wavelength. The 900 to 1700 nm range of the graph indicates the full operating range of the APDs. This photodiode has been optimized for use at 1300 nm, which is indicated with a vertical blue line.

Click for Details
Simplified Mechanical Drawing of the PDB570C

Click to Enlarge
A functional diagram of the PDB570C. The transimpedance amplifier generates an output voltage proportional to the difference between the photocurrents of the two photodiodes. The gain of the detector and cut-off frequency for the auto-balance feature can be set by the user.

Thorlabs' PDB570C Balanced Detector with Avalanche Photodiodes features an adjustable gain and three different detection modes: single detector, balanced (BAL), and auto-balanced (AUTO-BAL). The single detector mode allows the output of each photodiode to be measured individually. In this mode, sources can be connected to both INPUT+ and INPUT-, while the RF OUTPUT knob can be used to select which input you wish to monitor. The optical gain control allows the RF OUTPUT signal level to be adjusted. This feature is helpful when setting your experiment to provide equal input power levels to each APD prior to continuing with measurements in the balanced or auto-balanced detection modes.

In the BAL mode, the PDB570C functions as a standard balanced detector while allowing the optical gain of both photodiodes to be simultaneously adjusted. The output signal generated by the difference between the two input signals can then be measured via the RF OUTPUT connector.

In the AUTO-BAL mode, the optical gain control only affects INPUT-, while the gain for INPUT+ is automatically adjusted via a power-balance control loop to match the current generated by INPUT- (see the figure to the right). This circuit will compensate for power differences between the two optical input signals that vary at a slower rate than a cutoff frequency set via the CONTROL VELOCITY knob. Differences between the two input signals that vary slower than this frequency will not contribute to the voltage generated at RF OUTPUT. The CONTROL OUTPUT in auto-balance mode provides a measure of this rejected signal (i.e., the constant or slowly varying power imbalance between the two input optical signals). Therefore, the control circuit effectively functions as a lowpass filter for the CONTROL OUTPUT.

A second lowpass filter serves to remove noise from the output of the transimpedance amplifier before it is read out at RF OUTPUT. The CONTROL VELOCITY knob is not marked with graduated bandwidth values, as the control loop is affected by several factors including the optical gain, ratio of input power levels, absolute input power level, and the modulation depth of the disturbance signal. 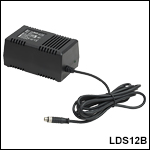 The LDS12B ±12 VDC Regulated Linear Power Supply is intended as a replacement for the supply included with our PDB line of balanced photodetectors sold on this page. The cord has three pins: one for ground, one for +12 V, and one for -12 V (see diagram above). This power supply ships with a location-specific power cord. This power supply can also be used with the PDA series of amplified photodetectors, PMM series of photomultiplier modules, APD series of avalanche photodetectors, and the FSAC autocorrelator for femtosecond lasers.