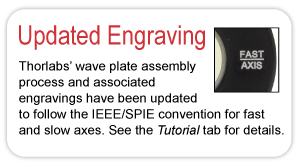 Multi-order refers to the fact that the retardance of a light path will undergo a certain number of full wavelength shifts (also referred to as the order, or m) in addition to the fractional design retardance. Compared to their zero-order counterparts, the retardance of multi-order wave plates are more sensitive to wavelength and temperature changes, however, they are less expensive and find use in many applications where the increased sensitivities is not an issue.

Our wave plates are mounted in a Ø1" housing with the fast axis of the wave plate clearly marked with a straight line on the housing's front panel. The wave plates are easily removed from their mounts for use in custom or OEM applications (see the Specs tab for the unmounted wave plate thickness). The unmounted waveplates have a small flat to indicate the fast axis (see image on the right). For further information on using and selecting a wave plate please visit our Wave Plate Selection Guide tab.

Thorlabs can also produce custom wave plates with no AR coating, a different AR coating, or a different design wavelength than those offered below. Please contact
Tech Support with inquiries.

Optical wave plates are constructed from birefringent materials that have a difference in refractive index between two orthogonal axes. This birefringent property introduces a velocity difference between light polarized along the fast and slow principal axes of the wave plate. The fast principal axis of the wave plate has a lower refractive index, resulting in a faster velocity for light polarized in this direction. Conversely, the slow axis has a higher refractive index, resulting in a slower velocity for light with this polarization. When light passes through a wave plate, this velocity difference leads to a phase difference between the two orthogonal polarization components. The actual phase shift depends on the properties of the material, the thickness of the wave plate, and the wavelength of the signal, and can be described as:

Wave plates are typically available with a retardance of λ/4 or λ/2, meaning that a phase shift of a quarter wavelength or a half a wavelength (respectively) is created.

As described above, a wave plate has two principal axes: fast and slow. Each axis has a different refractive index and, therefore, a different wave velocity. When a linearly polarized beam is incident on a half-wave plate, and the polarization of this beam does not coincide with one of these axes, the output polarization will be linear and rotated with respect to the polarization of the input beam (see image at right). When applying a circularly polarized beam, a clockwise (counterclockwise) circular polarization will transform into a counterclockwise (clockwise) circular polarization. 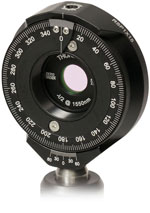 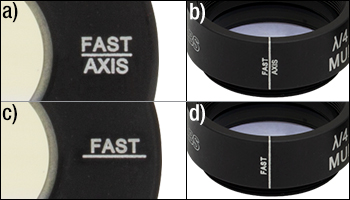 In October 2018, Thorlabs updated its wave plate assembly process and associated product engravings to be consistent with the IEEE/SPIE convention (see the Polarization Handedness Tutorial) for determining the fast and slow axes. By this convention, the current revisions of wave plates have the fast axis denoted by the “FAST AXIS” engraving visible in Figure 1 to the right. Although the location of the axes and the retardation value for each wave plate is easily determined, differentiating between the fast and slow axes is far more involved.

For most applications, the knowledge of whether an axis is fast or slow is not nearly as important as the retardation value. However, the fast/slow difference determines the left/right-hand circular polarization of light output from a quarter-wave plate, which can be important in applications such as atomic and solid state physics spectroscopy. To ensure the accuracy of our labeling moving forward, we have incorporated several redundant testing setups into our production processes, as described below.

This test setup is based on the method of Petre Logofatu1, which is also summarized well by Galgano and Henriques2. In this method, a light source passes through a generator, which is a linear polarizer oriented at 45° to the horizontal. Then, the light passes through the wave plate sample under test (SUT), is reflected off an uncoated metal surface (any metal with n > 1 will suffice), and passes through an analyzer (a second linear polarizer oriented at 90° to the generator). The light is then measured by a power sensor.

Our setup, shown in Figure 2 to the right, used a HeNe laser as the light source, two GTH10M-A Glan-Taylor polarizers as the generator and analyzer, a custom uncoated stainless steel reflective surface, an S120C power sensor, and a PM100D power meter console. A full parts list, except the custom metal surface and SUT, is provided below Figure 2.

As described by Logofatu, the power reflection coefficient, R in the equation below, can be derived from the Fresnel equations, showing that there will be a large difference in reflection off the metal depending on whether the fast or the slow axis of the SUT is horizontal.

where Rp and Rs represent the p-polarized and s-polarized components of R, Δ is the retardance of the SUT, and φ is the phase difference between the p and s reflection coefficients of the metallic surface. From this, we can determine which axis we would expect a higher reflection value when horizontal, and compare expected values to experimental values. Using a large angle of incidence allows for a large separation between s and p coefficients. This correlates with high versus low measured reflection, enabling easy determination of fast versus slow axis. As in both papers, the test was performed at a variety of angles. The results were then fitted to a theoretical curve. 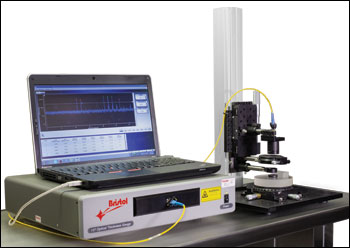 This test setup uses low coherence interferometry to measure the optical path length (OPL) of the SUT as it is rotated, where the longest OPL corresponds with the slow axis, and the shortest OPL corresponds with the fast axis. This method is additionally verified by modifying the reference arm of the interferometer, adding a reference window and specular back surface to allow for calculation of the group index (ngSUT) along and normal to the crystal axis. These values can then be compared to known values, assuring the reliability of this test.

Our setup, shown in Figure 3 to the right, used a modified Bristol 157 Series Optical Gauge. As can be seen in Figure 4 below, the majority of the low coherence interferometer is contained within the chassis of the optical gaugea. The measurement arm is then modified with Thorlabs components, such that the fiber output can be aligned with a low NA objective, passed through a LPNIR100 linear polarizer and partially reflected off a WG11010 reference window, all mounted on a 34 mm rail. The light then reflects off the SUT and a custom specular back surface to send the interferometric signal back to the optical gauge.

The additional reference surfaces and resulting physical thickness are used to double check the validity of the results. This is done with a quick calculation to determine the group index of both the fast and slow axes. Figure 5 shows a qualitative representation of the output produced by this setup. Peaks 1 and 2 are created by the reference window, Peaks 3 and 4 by the SUT wave plate, while Peak 5 is generated by the reference surface. Thickness data from peak to peak are calculated by the software and output into a table. By first taking the distance from Peak 2 to Peak 5 before the wave plate is inserted, the total physical thickness, Tair0, is obtainedb. When inserting the wave plate, we can then take the distance from Peak 2 to 3, Tair1, and Peak 4 to 5, Tair2. Using this information we can easily calculate the thickness of the wave plate, TSUT by subtracting Tair1 and Tair2 from Tair0. Measuring the distance from Peak 3 to Peak 4 would give us OPLSUT. Dividing OPLSUT by TSUT produces the group index of the SUT, ngSUT. Comparing this group index to that provided in literature for quartz3 or MgF24 both along and normal to the crystal axis, we are in good agreement.

Click to Enlarge
Figure 5: Representation of Output from Optical Gauge

MIR Wave Plates are made from a single piece of high-quality magnesium fluoride and provide either quarter-wave or half-wave retardance at 2.5 µm, 3.5 µm, 4.0 µm, 4.5 µm, or 5.3 µm. Light passing through these MIR wave plates will undergo a low number of full or partial wavelength shifts (also referred to as the order, or m) in addition to the fractional design retardance. This differs from true zero-order and multi-order wave plates which undergo no shift or a high number of shifts, respectively. The low-order design maintains near to true zero-order performance, making it a good alternative to true zero-order wave plates. The single magnesium fluoride substrate is also thinner compared to a zero-order design, which combines two multi-order wave plates, making our low-order retarders well suited for applications that are sensitive to dispersion.

Multi-Order Wave Plates are made such that the retardance of a light path will undergo a certain number of full wavelength shifts (also referred to as the order, or m) in addition to the fractional design retardance. Compared to their zero-order counterparts, the retardance of multi-order wave plates is more sensitive to wavelength and temperature changes. Multi-order wave plates are, however, a more economical solution for many applications where increased sensitivities are not an issue. Our multi-order wave plates are available for a number of discrete wavelengths ranging from 405 nm to 1550 nm. Thorlabs also offers Dual-Wavelength Multi-Order Wave Plates designed for use at both 532 nm and 1064 nm.

In addition to these options, Thorlabs also has the ability to design and manufacture custom wave plates for both OEM sales and individual low quantity orders. Our technical staff is able to help with all phases of your request: quoting, sales, and planning and manufacturing support. If you have a custom request or a question about our capabilities, please contact Tech Support to start a discussion.