Each Lens is
Clearly Marked 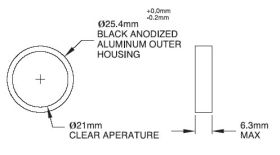 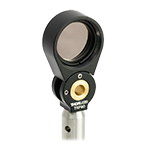 Thorlabs' Bandpass Filter Kits each contain 10 mounted bandpass filters that can be used to transmit a well-defined wavelength band in the visible or IR, while rejecting other unwanted radiation. Each filter is mounted in an unthreaded Ø1" black anodized aluminum ring that can be placed into our selection of Ø1" lens tubes and filter mounts using retaining rings, as shown to the right. The filter kit comes in a convenient plastic box for storage and transportation purposes. Please see the Tutorial tab for more information about the structure of the filter and the transmission direction arrow.

Thorlabs also offers a wide range of individually sold bandpass filters. To inquire about our custom bandpass filter options, including the possibility of alternative central wavelengths or bandwidths, please contact Tech Support. Please note that there is a significant lead time and tooling cost associated with custom filters that makes the purchase of only
a few pieces fairly costly.

The constructive interference conditions of a Fabry-Perot cavity allow light at the central wavelength, and a small band of wavelengths to either side, to be transmitted efficiently, while destructive interference prevents the light outside the passband from being transmitted. However, the band of blocked wavelengths on either side of the central wavelength is small. In order increase the blocking range of the filter, materials with broad blocking ranges are used for or coated onto the spacer layers and the substrate. Although these materials effectively block out of band transmission of incident radiation they also decrease the transmission through the filter in the passband. 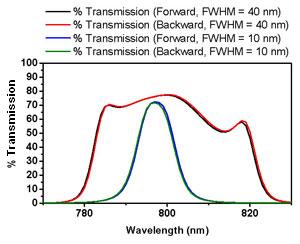 FB800-10 and FB800-40 filters were used to make the measurement that resulted in the plot above.

An engraved arrow on the edge of the filter is used to indicate the recommended direction for the transmission of light through the filter. Although the filter will function with either side facing the source it is better to place the coated side toward the source. This will minimize any thermal effects or possible thermal damage that blocking intense out-of-band radiation might caused due to the absorption of the out-of-band radiation by the substrate or colored glass filter layers. The plot to the right was made by illuminating the filter with a low intensity broadband light and measuring the transmission as a function of wavelength. The plot shows that the transmission direction through the filter has very little effect on the intensity and the spectrum of the light transmitted through the filter. The minimal variation between the forward and backward traces is most likely due to a small shift in the incident angle of the light on the filter introduced when the filter was removed, flipped over, and replaced in the jig.

The filter is intended to be used with collimated light normally incident on the surface of the filter. For uncollimated light or light striking the surface and an angle not normally incident to the surface the central wavelength (wavelength corresponding to peak transmission) will shift toward lower wavelengths and the shape of the transmission region (passband) will change. Varying the angle of incidence by a small amount can be used to effectively tune the passband over a narrow range. Large changes in the incident angle will cause larger shifts in the central wavelength but will also significantly distort the shape of the passband and, more importantly, cause a significant decrease in the transmittance of the passband.

The central wavelength of the bandpass filter can be tuned slightly (~1 nm over the operating range of the filter) by changing the temperature of the filter. This is primarily due to the slight thermal expansion or contraction of the layers. 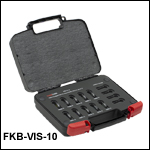 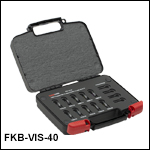 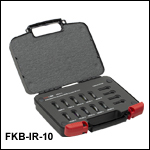