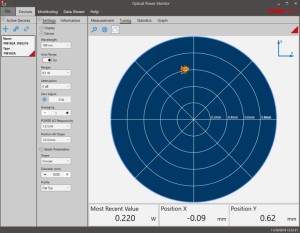 These position sensors use thermopile sensor elements to obtain high-resolution measurements of a beam's position and power. They incorporate our OEM thermal position detectors, which consist of four sensor quadrants that calculate the beam's position by comparing the intensity measured in each quadrant. See the Operation tab for details.

The S440C detector uses the TD4HR18XP PCB-mounted thermopile sensor and is optimized for high sensitivity. The housing features four Ø6 mm through holes for compatibility with 30 mm cage systems, as well as an 8-32 / M4 universal tap for post mounting. The S442C detector incorporates the TD4HP18XA aluminum-plate-mounted thermopile sensor and can measure power levels up to 50 W. The housing includes a heat sink for superior heat dissipation, as well as two 8-32 / M4 universal taps for post mounting.

We also offer thermal sensor heads for a wide range of applications, as well as photodiode-based position sensing detectors, which offer faster response times that make them suitable for automated alignment.

For information on recalibration services for these products, please contact Tech Support.

Compatible Power Meter Console and Power Meter Interfaces
Both detectors feature C-Series connectors and can be controlled using either the PM400 power meter console or the PM102 series power meter interfaces (all control units sold separately). The PM400 console features a touchscreen display for the power and position readout. The PM102 series requires a PC with the OPM software in order to operate the sensor in a power meter system; depending on the PM102 model used, operation can be through USB 2.0, RS-232, or UART.

There are a number of different display options that can be viewed either on the PM400 console display screen or in the OPM software GUI: 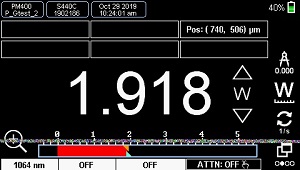 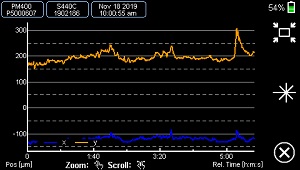 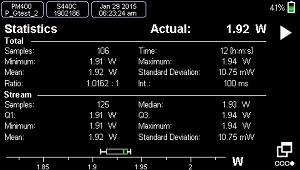 Click to Enlarge
Click Here for Raw Data
The wavelength range of the data in this graph is limited by the detector used during testing. The thermal position detectors are capable of operating at up to 20 µm.

Click to Enlarge
Figure 1: A thermal sensor with axially configured thermocouples, which is depicted as seen from the side. Light is incident on the top, and heat flows down through the thermocouple layer and dissipates in the heat sink below.

These thermal power detectors are based on thermopile sensors. The top layer of the sensor, which appears gray in color, consists of a light-absorbing material. Located immediately behind the sensor, and in thermal contact with it, is a layer containing multiple thermocouples. Thermocouples are made by bringing two dissimilar metals into contact, and their point of contact is called a junction. The other side of the thermocouple layer must be thermally coupled to a heat sink. The thermocouples are connected in series, and the placement of the junctions alternates from being in close proximity to the absorber to being in close proximity to the heat sink. This axial (or matrix) configuration of thermocouples is diagrammed in Figure 1.

The absorber converts incident light energy into heat. The heat flows from the absorber, across the thermocouples, and to the heat sink, where it dissipates. The temperatures of the thermocouple junctions placed close to the absorber are higher than the adjacent junctions placed close to the heat sink. This arrangement takes advantage of the thermoelectric (Seebeck) effect, in which a temperature difference between adjacent junctions generates a proportional voltage difference. By connecting multiple thermocouples in series, the magnitude of the generated voltage is increased.

Axially-configured sensors such as the thermal quadrant detectors on this page can achieve high resolutions in the microwatt range while providing relatively fast response times. These sensors detect optical powers up to 50 Watts, which is limited mostly by the thickness of the absorbing material.

Figure 2: The sensor area consists of four thermopile sensors arranged as quadrants of a square.

Quadrant Detector Beam Position Calculation
Each thermal position detector consists of four individual thermopile sensors arranged in a 2 x 2 matrix, as shown in Figure 2. The quadrants are mechanically coupled by one aluminum plate but electrically isolated; thus, heat is free to flow across the entire active area, but the signal from each quadrant measures the response in only that quadrant's thermopile. The beam's coordinates X and Y are calculated using the voltage outputs of all four detectors:

where V1, V2, V3, and V4 are the output voltage signals from Q1, Q2, Q3, and Q4, respectively, in Figure 2. Since the sensor response is nonlinear, the detector uses a calibration factor for each axis, Calx and Caly, to calculate the absolute position.

Click to Enlarge
Figure 3: Natural Response of the S440C and S442C Detectors. The dotted line is at 0.99 and the red square indicates the point on the curve corresponding to a single sensor time constant.

Natural Responses, the Sensor Time Constant, and Power Measurement Predictions
The typical natural response of a thermal sensor is its measured response to being instantaneously and steadily illuminated after being held in total darkness. This step function illumination stimulus produces a measured response that can be modeled using an exponential function and is similar to the function describing the rate at which a capacitor charges. Figure 3 shows the natural response measured for the thermal position sensing detectors.

For the most accurate results, thermal power sensors should be protected from air flow and other thermal disturbances during operation. Otherwise, measurements will drift. This is of particular importance for low power sensors with high resolution. Handheld use is not recommended for any of the thermal power sensors, as body heat transferred to the sensor or heat sink can negatively impact the accuracy of the measurements.

When used with our C-series sensors, Thorlabs' power meter consoles and interfaces recognize the type of connected sensor and measure the current or voltage as appropriate. Our C-series sensors have responsivity calibration data stored in their connectors. The console will read out the responsivity value for the user-entered wavelength and calculate a power or energy reading.

The consoles and interfaces are also capable of providing a readout of the current or voltage delivered by the sensor. Select models also feature an analog output. 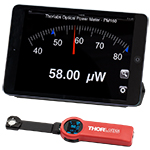 This tab outlines the full selection of Thorlabs' power and energy sensors. Refer to the lower right table for power meter console and interface compatibility information.

In addition to the power and energy sensors listed below, Thorlabs also offers all-in-one, wireless, handheld power meters and compact USB power meter interfaces that contain either a photodiode or a thermal sensor, as well as power meter bundles that include a console, sensor head, and post mounting accessories.

There are two options for comparing the specifications of our Power and Energy Sensors. The expandable table below sorts our sensors by type (e.g., photodiode, thermal, or pyroelectric) and provides key specifications.

Alternatively, the selection guide graphic further below arranges our entire selection of photodiode and thermal power sensors by wavelength (left) or optical power range (right). Each box contains the item # and specified range of the sensor. These graphs allow for easy identification of the sensor heads available for a specific wavelength or power range.