Fixed
Terminator Kit
(Not to Scale) 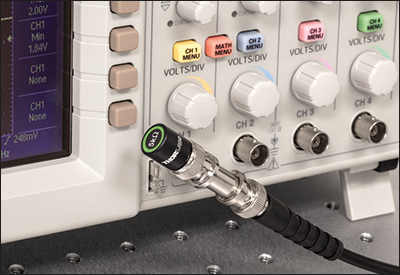 When using a reverse biased photodiode, such as our packaged biased detectors, a photocurrent is produced when photons are absorbed. A load resistor is placed across the output of the detector, and the voltage drop across the resistor is measured by an oscilloscope or multimeter. A 50 Ω load is typically used to maximize the signal bandwidth, but higher voltages are produced by higher resistances at the expense of lower bandwidth. The image to the far right shows a typical application with our DET100A2 biased detector (not shown) and our FT502 5 kΩ stub-style terminator.

Thorlabs also includes our feed-through terminators in our electrical adapters kits, which also have a variety of BNC, SMA, and banana adapters. 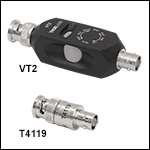 The variable resistance terminator is ideal for use with our biased photodetectors. For these photodetectors, a 50 Ω termination maximizes response time but can generate a low voltage in many coupling applications. The VT2 makes it convenient to switch to a higher resistance (and thus a higher voltage) while tweaking the system, and then down to a lower resistance for the maximum response time.

Fixed Resistance BNC Terminator
The T4119 is a 50 Ω feed-through terminator, which maximizes the signal bandwidth observable with our biased detectors. It can dissipate signals with input powers of 2 W (average at 25 °C) and frequencies up to 500 MHz. 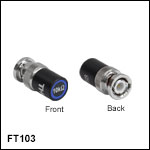 Thorlabs' stub-style BNC terminators are compact and designed for switching between different resistors quickly. In addition, the resistors chosen have maximum power ratings that support the full 0 to 10 V output capability of our biased detectors. For measuring high-speed signals, it is best to use a 50 Ω terminator to maximize the bandwidth of the biased detector. The higher resistance values are ideal for measuring low bandwidth signals with our biased detectors, as the voltage across the resistor will be higher. Please note that as the resistance is increased above 50 Ω the bandwidth will be decreased; at these higher resistance values, as the cable becomes longer the bandwidth will decrease further.

When using these terminators, it is necessary to use a BNC "T" adapter, such as our T3285, to connect both the signal BNC cable and the terminator to the detector. 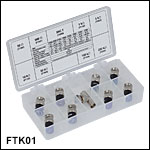 The FTK01 Stub-Style BNC Terminator Kit contains eight terminators with resistance values ranging from 50 Ω to 250 kΩ. One T3285 BNC "T" Adapter (F-M-F) is also included in the terminator kit. When using these terminators, it is necessary to use a BNC "T" adapter to connect both the signal BNC cable and the terminator to the detector. The terminators and adapter are packaged in a 7.0" x 3.5" x 1.25" (177.8 mm x 88.9 mm x 31.8 mm) plastic box with nine labeled compartments. This kit offers added savings over individual resistor purchases. The table below provides specifications for each BNC terminator.