Thorlabs' LEDs on Metal-Core Printed Circuit Boards (MCPCBs) are designed to provide high-power output in a compact package. Each LED package consists of a single LED that has been soldered to an MCPCB. These LEDs are ideal for OEM or custom applications; they should not be used for household illumination.

Thorlabs uses high-thermal-conductivity MCPCB materials. The MCPCB is designed to provide good thermal management. However, the LED must still be mounted onto an appropriate heat sink using thermal paste to ensure proper operation and to maximize operating lifetime. Mounting holes are provided on the MCPCB surface for attaching the LED to a heat sink; the Ø2 mm through holes are compatible with #1 (M2) screws (not included).

Thorlabs also offers mounted LEDs with an integrated heat sink, as well as collimated mounted LEDs, which are compatible with microscopes from major manufacturers. For fiber applications, we also offer fiber-coupled LEDs. For questions on choosing an appropriate LED and to discuss mounting requirements, please contact Tech Support.

Optimized Thermal Management
These LEDs possess good thermal stability properties; hence, degradation of the optical output power due to increased LED temperature is not an issue when the LED is properly mounted to a heat sink using thermal paste, thermal epoxy, or thermally conductive double-sided tape.

White Light, Dual-Peak, and Broadband LEDs
Our warm, neutral, and cold white LEDs feature broad spectra that span several hundred nanometers. The difference in appearance amongst these three LEDs can be described using the correlated color temperature, which indicates that the LEDs color appearance is similar to a black body radiator at that temperature. In general, warm white LEDs offer a spectrum similar to a tungsten source, while cold white LEDs have a stronger blue component to the spectrum; neutral white LEDs provide a more even illumination spectrum over the visible range than warm white or cold white LEDs. Cold white LEDs are more suited for fluorescence microscopy applications or cameras with white balancing, because of a higher intensity at most wavelengths compared to warm white LEDs. Neutral white LEDs are ideal for horticultural applications.

For horticultural applications requiring illumination in both red and blue portions of the spectrum, Thorlabs offers the MPRP1D2. This purple LED features dual peaks at 455 nm and 640 nm, respectively, to stimulate photosynthesis (see graph to compare the absorption peaks of photosynthesis pigments with the LED spectrum). The LED was designed to maintain the red/blue ratio of the emission spectrum over its lifetime to provide high uniformity of plant growth.

Soldering
These LEDs have been soldered to a metal core with low thermal resistance. While this feature allows for good thermal management, it can also prevent the metal pads from reaching the appropriate temperature for soldering when the package is connected to a heat sink. To properly solder wires to the pads, first make sure that the metal core is not in contact with a heat sink or a metal surface. We recommend using a small vise or similar device to hold the MCPCB during the soldering process and wires with a minimum gauge of 24 AWG (0.25 mm2).

To solder wires to the MCPCB, first hold the copper bit of the soldering iron on one of the pads for approximately 30 seconds using a soldering temperature of about 350 °C. The soldering iron will heat the entire metal-core PCB, so do not touch the LED package until it has cooled down after the soldering process. Test the temperature by touching tin solder to the pad: the solder will melt and flow evenly over the entire pad at the correct temperature. Coat the other pads with tin solder. Now, solder the wires to the pads. Use tweezers or pliers to remove the MCPCB from the vise and place it on a heat sink or metal surface. The metal-core PCB will cool down in several seconds and is now ready for your application.

For convenient connection of the LEDs to the drivers listed on the LED Drivers tab, please order the optional CAB-LEDD1 LED connection cable below.

Driver Options and Pin Assignments
Thorlabs offers four drivers: LEDD1B, DC2200, DC4100, and DC4104 (the latter two require the DC4100-HUB). See the LED Drivers tab for compatibility information and a list of specifications. The LEDD1B is capable of providing LED modulation frequencies up to 5 kHz, while DC4100 and DC4104 can modulate the LED at a rate up to 100 kHz. The DC2200 can provide modulation at up to 250 kHz if driven by an external source. Please note that MCPCB LEDs are not compatible with the EEPROM feature of the DC2200, DC4100, and DC4104, which automatically adjusts for the current limits of our mounted LEDs. Therefore, care must be taken not to exceed the current limits of the LEDs offered on this page.

To connect the PCB to a controller, please note that the soldering pad labeled "+" is the Anode (+V), and the pad labeled "-" is the Cathode. Although it is not required to make any connections in order to operate the LED, the EEPROM IO and EEPROM GND connections can be used when any LED listed in the tables below is operated with a Thorlabs LED driver. The soldering pads on different items may be in different locations, but the labels are the same.

The actual spectral output and total output power of any given LED will vary due to variations in the manufacturing process and operating parameters, such as temperature and current. Both a typical and minimum output power are specified to help you select that suits your needs. Each metal-core PCB LED will provide at least the minimum specified output power at the maximum current. In order to provide a point of comparison for the relative powers of LEDs with different nominal wavelengths, the spectra in the plots below have been scaled to the minimum output power for each LED. This data is representative, not absolute. An Excel file with normalized and scaled spectra for all of the unmounted LEDs can be downloaded here.

Ray data for Zemax is available for some of the bare LEDs incorporated into these high-powered light sources. This data is provided in a zipped folder that can be downloaded by clicking on the red document icons (

) next to the part numbers in the pricing tables below. Every zipped folder contains an information file and one or more ray files for use with Zemax:

For the LEDs marked with an superscript "a" in the table to the right, the following additional pieces of information are also included in the zipped folder:

The table to the right summarizes the ray files available for each LED and any other supporting documentation provided.

Please note that our deep UV LEDs radiate intense UV light during operation. Precautions must be taken to prevent looking directly at the UV light, and UV light protective glasses must be worn to avoid eye damage. Exposure of the skin and other body parts to UV light should be avoided.

Please note that our UV LEDs radiate intense UV light during operation. Precautions must be taken to prevent looking directly at the UV light, and UV light protective glasses must be worn to avoid eye damage. Exposure of the skin and other body parts to UV light should be avoided.

Please note that the 415 nm (violet) and 430 nm (violet) LEDs radiate intense UV light during operation. Precautions must be taken to prevent looking directly at the UV light, and UV light protective glasses must be worn to avoid eye damage. Exposure of the skin and other body parts to the UV light should be avoided.

Our dual-peak LED was designed for applications requiring illumination in both red and blue portions of the spectrum, such as horticulture. This purple LED features dual peaks at 455 nm and 640 nm, respectively, to stimulate photosynthesis (see graph to compare the absorption peaks of photosynthesis pigments with the LED spectrum). The LED was designed to maintain the red/blue ratio of the emission spectrum over its lifetime to provide high uniformity of plant growth.

The MBB1D1 broadband LED has a relatively flat spectral emission over a wide wavelength range. Its 10 dB bandwidth ranges between 470 nm and 850 nm. The MBB2D1 broadband LED features a spectrum with peaks at approximately 770 nm, 860 nm, and 940 nm. 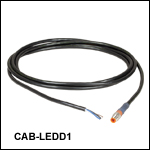 Pin Connections
The diagram above shows the male connector for use with the above Thorlabs LED drivers. The connector is a standard M8x1 sensor circular connector. Pins 1 and 2 are the connection to the LED. Please note that the bare PCB board LEDs shown on this page do not include an EEPROM like our mounted LEDs; hence pins 3 and 4 should not be connected. Also, note that the pin connection diagram shown here may not be valid for third-party LED drivers.