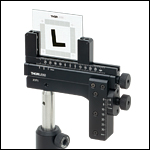 Thorlabs' Slant Edge MTF Target allows the user to determine the spatial frequency response of an imaging system via a slant edge pattern or Ronchi rulings. The slant edge pattern is L-shaped and tilted at 5° for compatibility with ISO 12233. The Ronchi rulings include twenty individual rulings, each 5 mm x 5 mm in dimension and ranging in resolution from 10 line pairs per millimeter (lp/mm) to 200 lp/mm in 10 lp/mm intervals. Made from a soda lime glass substrate with low-reflectivity, vacuum-sputtered chrome, the target also features a cross pattern at each of the four corners of the overall pattern for alignment. Each pattern is manufactured using photolithography, allowing for edge features to be resolved down to approximately 1 µm. The high edge sharpness provided by this method is essential when using the modulation transfer function (MTF), described below, to determine the performance of an imaging system.

Mounting
To mount this target, Thorlabs offers the XYF1(/M) Test Target Positioning Mount (see photo to the right). This mount is capable of translating the target over a 50 mm (1.97") x 30 mm (1.18") area and secures the target using nylon-tipped setscrews. The mount contains five 8-32 (M4) taps for six post-mountable orientations.

Modulation Transfer Function
The modulation transfer function (MTF) is used to determine the resolution and performance of an imaging system. Several kinds of targets exist to measure the MTF of a system, including sine wave targets, grill targets, and the slanted edge targets discussed here. For the slant edge method, a slant edge target, such as the one featured on this page, is imaged. The target consists of a distinct dark edge that is tilted at some angle, usually between one and five degrees. The edge should be produced using a method that will produce as distinct an edge as possible. In the case of the target sold here, photolithography is used.

To calculate the MTF, begin with the edge spread function (ESF), which is the intensity of the image as a function of spatial position as the the edge is approached and crossed over (see Zhang et al., Proc. SPIE 8293, 2012). Due to imperfections in the imaging system, the ESF will be sloped on the border of the slanted edge, as opposed to being a perfect step function. Next, take the derivative of the ESF to produce the line spread function (LSF). Finally, take the Fourier transform of the LSF and normalize it to produce the MTF. The MTF, which will range from zero to one, can be plotted versus frequency (typically measured in cycles/mm). Frequencies with a corresponding MTF value close to one will be reproduced at approximately their original resolution. As the frequency increases, the MTF will fall to zero and the frequency will become indiscernible. The frequency that corresponds to a MTF of 0.5 is typically used as a benchmark to compare different imaging systems.

Our in-house photolithographic design and production capabilities enable us to create a range of patterned optics. We manufacture test targets, distortion grids, and reticles at our Thorlabs Spectral Works facility in Columbia, South Carolina. These components have served a wide variety of applications, being implemented in microscopes, imaging systems, and optical alignment setups.

In addition to our catalog test targets and reticles offered from stock, we can provide custom chrome patterns on soda lime, UV fused silica, or quartz substrates from 8 mm by 8 mm up to 85 mm by 85 mm. Substrates can be cut to shape for your application. Our photolithographic coating process allows us to create chrome features down to 1 µm. A few sample patterns are shown below, which can made positive or negative, as shown in the image directly below.

For a quote on custom test targets and reticles, please contact us at TSW@thorlabs.com.

We do not suggest using a towel, rag, or wipe to dry the surface. If contamination persists, soak the reticle or target in a detergent and water solution for 1 hour, repeating as necessary.