Browse Our Selection of Optomechanical Components

As part of Thorlabs' commitment to serve the international photonics community, we design our products for compatibility with imperial and metric setups. When it is possible for one part to fulfill the needs of both imperial and metric customers simultaneously, only one part (which we call "universal") is developed and sold. However, when it is not feasible or useful for a single part to satisfy both standards, Thorlabs designs both an imperial item and a metric equivalent.

In contrast, consider Thorlabs' KM100 Kinematic Mirror Mount. These parts use counterbored holes (which have smooth edges) for mounting, rather than threads. The lack of threading means that either 8-32 or M4 cap screws can be dropped right in. Therefore, only one version, which we call a "universal" version, has been designed. For more information on universal mounts, please see the "How Do I Use a Universal Mount?" section below.

To limit confusion for our customers who have both imperial and metric optomechanics, metric parts typically include an identification marker not present on the imperial equivalent. For example, as shown to the right, our metric TR posts are machined with a ring on the tapered edge next to the M4-threaded hole. Other examples of metric ID marks are shown in the drawings that appear later in this tutorial.

Universal Parts Use Cap Screws to Attach to Other Parts

Universal mounts do not contain threaded holes for mounting. Hence, a common question that we receive is how to attach a universal mount to an imperial or metric post since our posts ship with either an 8-32 or M4 setscrew installed. This setscrew is easily removed with a 5/64" or 2 mm balldriver or hex key, which exposes an 8-32 or M4 threading. An 8-32 or M4 cap screw can then be inserted through the universal mount and tightened into the vacated tapped hole.

Imperial and Metric Parts Use Different Basic Units of Length 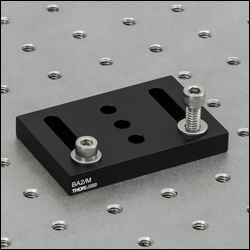 Click to Enlarge
If a BA2/M base is placed parallel and perpendicular to the tapped hole matrix of an imperial optical table, one of the screws will not be able to tighten and mechanical stability will be sacrificed. 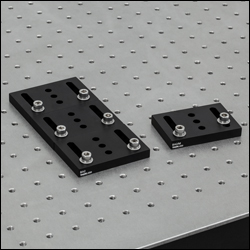 Click to Enlarge
Here, BA2 and BA2/M bases have been bolted to an imperial optical table. Several BA2's can be located adjacent to each other without any issues. However, the BA2/M is forced to rotate in order to be secured, wasting table space.

In general, we try to keep part numbers as short as practical, so there may not always be an extra digit in the item number of metric parts. In these cases, you may rely on the /M suffix to tell you if the part is metric. For example, consider our Aluminum Breadboards. The MB1012 is an imperial 10" x 12" breadboard (with 1/4"-20 tapped holes at 1" spacings), while the MB1560/M is a metric 15 cm x 60 cm breadboard (with M6 tapped holes at 25 mm spacings). Both of these parts have four digits in their part numbers, but one is imperial and the other is metric.

Click to Enlarge
BA2 Dimensions are Optimized for Imperial Setups

Click to Enlarge
BA2/M Dimensions are Optimized for Metric Setups

Click to Enlarge
LMR1/M Metric Lens Mount is SM1-Threaded, Accepts Optics up to Ø25.4 mm, and Contains an M4 Tap

Click to Enlarge
LMR1 Imperial Lens Mount is SM1-Threaded, Accepts Optics up to Ø1", and Contains an 8-32 Tap

This has two immediate consequences. First, the LMR1/M is not too small for Ø1" optics, so the mount can accommodate optics up to 1" in diameter without a problem. However, the LMR1/M will not perfectly center Ø25.0 mm optics. This may be a concern for applications in which centration is critical, as in any application that uses a lens.

Some drawings on our website may not make it clear that imperial and metric parts have the same bore size. This impression usually results from rounding (read the section titled "Mechanical Drawings Give Design Units First" below). Should any questions arise as you plan your setup, please contact Technical Support for assistance.

SM-Threaded Holes Do Not Differ Between Imperial and Metric Parts

Thorlabs has developed a family of in-house threading standards for common optic diameters, denoted with the SM prefix. These threads provide a convenient way to center, secure, and position optics in their mounts. Because we have extensively deployed the SM standards across our entire optomechanical product line, you can be assured that the parts you buy from us are made to be mechanically compatible. A list of the common SM prefixes and their associated optic diameters is shown in the table to the right.

In optic mounts, the /M suffix only refers to the tapped mounting holes. In other words, when Thorlabs designates an SM-threaded product as imperial or metric, the SM-threaded hole is the same in both versions.

Thorlabs provides mechanical drawings for nearly all its parts in PDF and DXF file formats, and the vast majority of parts also have 3D models in SolidWorks, eDrawing, and Step file formats. The PDF and DXF drawings include each part's design measurements, call out important physical features of each product (such as mounting holes, metric ID marks, and specialized features like locking screws and retaining rings), and are the basis for the sketches shown in this tutorial and elsewhere on our website. They can be accessed by clicking on the Docs Icon on the webpage of the part.

Although the measurements in the design units of the part are always exact to this precision, the converted measurements may be rounded. For example, if a converted measurement on a drawing is not given to the stated precision (two decimal places for imperial dimensions and one decimal place for metric dimensions), it has been rounded, although the presence of the conventional number of digits after the decimal does not guarantee that rounding has not occurred. We abandoned the practice of rounding some years ago, but it still surfaces in drawings that have not yet been updated. Therefore, if you need to use a measurement conversion, it is prudent to check the conversion yourself, using the design units as the basis. 1" is exactly 25.4 mm.

Should you have any concerns about reading a mechanical drawing, please contact Technical Support for assistance.

Click to Enlarge
Our BA2F Flexure Clamping Base has imperial design units. Therefore, its drawing gives the product dimensions in inches, with a metric conversion shown in brackets.

Click to Enlarge
Our BA2F/M Flexure Clamping Base has metric design units. Therefore, its drawing gives the product dimensions in millimeters, with an imperial conversion shown in brackets.

Appendix: What Defines a Threading?

Threadings are also defined by the tolerance of the threads (how much the distance between the threads can vary), the shape of the threads (whether their crests and roots have sharp or rounded edges), the thread angle, and the major and minor diameter. For more details, please consult the Machinery's Handbook, available for purchase at many bookstores.