Thorlabs' Fabry-Perot Quantum Cascade Lasers (QCLs) exhibit broadband emission spanning 50 cm-1. The laser's specified output power is the sum over the full spectral bandwidth. Since these QCLs have broadband emission, they are well suited for medical imaging, MIR illumination, and microscopy applications. The output spectrum, L-I-V curve, and beam propagation data of each serial-numbered device, measured by an automated test station before shipment, are available below and are also included on a data sheet that ships with the device.

Our QCLs emit a vertically polarized, collimated beam. At the output, a wedged zinc sulfide window AR-coated for 3.5 - 6 µm prevents back reflections from returning to the laser chip, but also causes the beam to exit the mount at a 2.0 ± 0.6° angle. A thermoelectric cooler and a thermistor are integrated into each laser for temperature control. The laser package is sealed, although the seal is not hermetic.

Although these lasers are specified for CW output, they are compatible with pulsed applications provided that the CW max operating current is not exceeded. These lasers do not have built-in monitor photodiodes and therefore cannot be operated in constant power mode. For more information or for custom options, please contact Tech Support.

Mounts and Drivers
HHL lasers are compatible with any HHL mount, although cables for HHL packages are typically not rated for the 6 A maximum current of the internal thermoelectric cooler. If designing your own mounting solution, note that due to these lasers' heat loads, we recommend that they be mounted in a thermally conductive housing to prevent heat buildup. Heat loads for Fabry-Perot QCLs can be up to 70 W (see the Handling tab for additional information).

The QCLs on this page have operating voltages up to 15 V. We recommend using drivers such as our ITC4002QCL or ITC4005QCL Dual Current / Temperature Controller, which are rated to support this high operating voltage. See the Drivers tab for more information.

To get L-I-V and spectral measurements of a specific, serial-numbered device, click "Choose Item" next to the part number below, then click on the Docs Icon next to the serial number of the device.

Laser Mount Compatibility
When designing your own mounting solution, note that due to these lasers' heat loads, we recommend that they be secured in a thermally conductive housing with sufficient cooling capacity, either active or passive, to prevent heat buildup. The total heat loads for the Fabry-Perot QCL HHL package can be up to 70 W, although a typical heat load from a Fabry-Perot QCL itself is around 20 W.

Although soldering to the leads of our HHL lasers is possible, we generally recommend using cables specifically designed for HHL packages. Please note that third-party cables for high heat load packages are typically not rated for the 6 A maximum current of the internal thermoelectric cooler. If soldering to the leads on an HHL package, the maximum soldering temperature and time are 250 °C and 10 seconds, respectively. 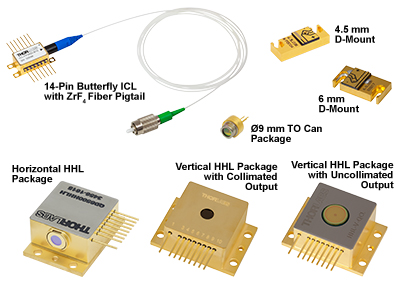 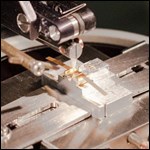 Click to Enlarge
Available Wavelengths for Custom QCLs and ICLs