Thorlabs offers a telecentric lens with a magnification level of 0.051X. Each lens has an adjustable iris that varies the f/#. The lens is designed for 2/3" format sensors, such as those on our scientific CCD cameras. Sensors smaller than 2/3", such as those in our other CCD cameras, can also be used but with reduced field of view (field of view values for various sensor formats can be found on the Specs tab). The lens housing features external C-Mount (1.000"-32) threading on the image side of the lens, which is also compatible with our cameras. By using an SM1A10 thread adapter, the C-Mount can be mated to internal SM1 (1.035"-40) threads for compatibility with our Lens Tubes or other SM1-threaded mounts.

Each individual lens ships with a detailed test report showing the exact specifications and graphs for the lens; PDF samples are available in the table below. Graphs showing typical performance for field curvature, distortion, relative illumination, and Modulation Transfer Function (MTF) can be found on the Graphs tab above.

Please note that due to the size and weight of the MVTC23005, users must take care to properly mount and support this lens.

The item on this page will be retired without replacement when stock is depleted. If you require this part for line production, please contact our OEM Team.

Click on the icons in the table below to see performance graphs for the telecentric lens. These graphs show the theoretically calculated modeling results from Zemax for the field curvature, distortion, relative illumination, and Modulation Transfer Function (MTF) for our telecentric lenses. Each lens ships with an individual test data sheet that contains test data for the lens, including plots of the MTF and distortion.

Telecentric lenses are designed to have a constant magnification regardless of the object's distance or location in the field of view. This attribute is ideal for many machine vision measurement applications, as measurements of an object's dimension will be independent of where it is located.

Figure 2: A ray trace through an idealized bi-telecentric lens system. Note that the chief rays (the center ray of each color) is parallel to the optical axis in both image and object space, which means that the magnification will remain constant regardless of object distance.

Conventional Lenses
In conventional lenses, the entrance and exit pupils are not located at infinity, so the chief rays will not be parallel to the optical axis. In this case, the magnification of the object depends on its distance from the lens and its position in the field of view. Figure 2 shows an example ray trace through a conventional camera lens; notice how the chief rays are angled with respect to the optical axis in both image and object space. Note that both Figures 2 and 3 feature the same lens design; only the aperture stop location was varied to shift the telecentric system to a non-telecentric one.

Figure 3: A ray trace through an idealized conventional camera lens system. Note that the chief rays (the center ray of each color) is not parallel to the optic axis in both image and object space, which means that the magnification will vary with object distance.

Example Images
Figures 4 and 5 show photographs taken with a telecentric lens and a standard camera lens, respectively. With the telecentric imaging system, the height of the two screws appears to be the same, even though the object planes are separated by approximately 45 mm along the optical axis. With the conventional imaging system, the two screws appear to be different heights, and therefore a machine vision system based on this lens will lead to incorrect dimensional measurements. 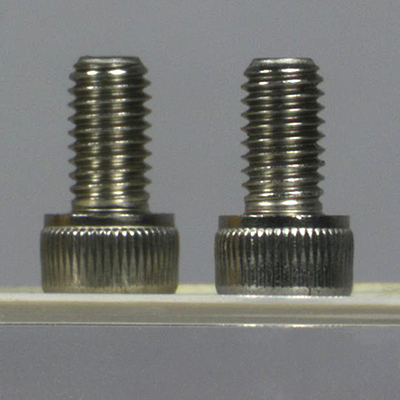 Click to Enlarge
Figure 4: An image of two identical 8-32 cap screws imaged with our previous generation MVTC23013 0.128X Telecentric Lens. Although the screws appear to be the same size and in the same object plane, they are actually separated by a distance of approximately 45 mm along the optical axis. 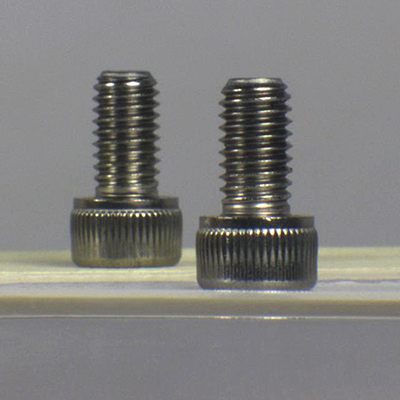 Click to Enlarge
Figure 5: The same two screws photographed with our MVL7000 conventional zoom lens. In this image, the perspective error due to the separation of the screws would lead to incorrect height measurements.