Thorlabs' Co-Fired Piezoelectric Actuators are composed of stacked PZT layers separated by electrodes that span the entire surface area of the layer. The entire stack is sintered together into one monolithic structure. These piezoelectric actuators transform electrical energy into precisely controlled mechanical displacements and are ideal for applications requiring rapid, precise positional changes on the nanometer or micrometer scale.

Co-Fired Piezo Stacks differ from Discrete Piezo Stacks in the insulation and conductor design. In co-fired stacks, small amounts of glass filament are precisely located on each side of the stack so that every internal electrode is insulated from the external supply electrode of opposite polarity. This separation enables sequential layers to alternate connections to the positive and negative poles (or applied bias and ground). Compared to using an insulating gap as in discrete stacks, this design allows for a higher contact area and percentage of active PZT material than discrete stacks, which lends itself to lower internal stress. For more details and a diagram further comparing the two piezo stack insulation methods, please refer to the Operation tab.

These multilayer devices are ideal for nano- and micro-positioning. As the voltage applied to the actuator goes from 0 V to the maximum drive voltage, the piezo expands longitudinally. These open-loop piezoelectric actuators offer maximum displacements from 4.6 µm to 20.0 µm. Piezoelectric devices, such as these actuators, exhibit hysteresis, thus the displacement of the actuator is not solely based on applied voltage. When it is necessary to precisely track the displacement of the actuator, Thorlabs recommends our piezo stack actuators with attached strain gauges.

Integration
Our PC4 Series Piezo Stacks are compatible with hemispheres and end cups to minimize internal stress when mounting. Please refer to the info icons (

) below for item-specific compatibility. To mount the PC4 series piezo stacks and attach hemispheres and end cups, we recommend using an epoxy that cures at 80 °C (176 °F) or below, such as our 353NDPK or TS10 epoxies or Loctite® Hysol® 9340. When interfacing a mechanical load with the piezoelectric actuator, it is important to center the mechanical load on the actuator's end face to avoid applying a torque that could damage the actuator. Additionally, the piezoelectric actuator should be interfaced with an external load such that the induced force is directed along the actuator's axis of displacement. If the actuator is incorporated into a design that calls for a preload, it is recommended that the preload does not exceed 50% of the specified blocking force. Please refer to the Operation tab above for more information.

Co-Fired Piezo Chips, Co-Fired Piezo Stacks, and Discrete Piezo Stacks
Generally speaking, Thorlabs' co-fired piezo chips and stacks are constructed similarly. In both cases, a structure is built up from alternating electrode layers and green-state lead zirconate titanate (PZT) piezoelectric layers. The assembled structure is then sintered into a single monolithic unit. Supply electrodes of opposite polarity are attached to opposite sides of the structure. Each internal electrode is electrically coupled to one or the other supply electrode, such that no two adjacent internal electrodes have the same polarity. The most significant differences between the co-fired chips and stacks arise from the way each internal electrode is electrically isolated from the supply electrodes of opposite polarity. The different electrical insulation approaches influence the mechanical properties of the actuators. Actuators fabricated using the two different approaches are diagrammed in Figure 1.

One way of increasing the height, and therefore the maximum stroke, of piezo actuators based on these chips is to fabricate discrete piezo stacks. These are manufactured by bonding multiple chips together in series using a glass-bead epoxy. Discrete stacks can be fabricated to substantially longer lengths than co-fired chips or stacks, and this allows them to achieve higher maximum displacements while maintaining sub-millisecond response times and a low drive voltage range. As the constituent chips are sealed within a ceramic barrier layer, discrete stacks have superior resistance to humidity and heat than co-fired stacks, which are sealed in an epoxy resin coating.

In the case of co-fired stacks (On-Stack Insulation), the electrodes extend across the full width of the PZT layers. The edges of the electrodes are flush with all four sides of the stack, including the side with the supply electrode of opposite polarity. The edge of the internal electrode is insulated from that supply electrode by a layer of glass filament applied to the side of the stack. Precision localized application of the glass filament ensures that the electrode edge is electrically isolated from the supply electrode, and that the filament is applied over minimal surface area; the ability of the supply electrode to make electrical connections to the desired internal electrodes is not affected, and the small amount of applied glass filament does not affect the operation of the actuator. With their full-width electrodes, piezo actuators made using this insulating approach are characterized by homogeneous internal stress. Co-fired stacks can therefore be fabricated with greater heights than chips fabricated using the in-chip insulation approach. Co-fired stacks also have a higher percentage of active PZT material than the discrete stacks, which include inactive bonding layers of glass-bead epoxy. They are coated in an epoxy resin.

Interfacing a Piezoelectric Stack with a Load
Piezoceramics are brittle and have low tensile strength. Avoid loading conditions that subject the actuator to lateral, transverse, or bending forces. When applied incorrectly, an external load that may appear to be compressive can, through bending moments, cause high tensile stresses within the piezoelectric device. Improperly mounting a load to the piezoelectric actuator can easily result in internal stresses that will damage the actuator. To avoid this, the piezoelectric actuator should be interfaced with an external load such that the induced force is directed along the actuator's axis of displacement. The load should be centered on and applied uniformly over as much of the actuator's mounting surface as possible. When interfacing the flat surface of a load with an actuator capped with a flat mounting surface, ensure the two surfaces are highly flat and smooth and that there is good parallelism between the two when they are mated. If the external load is directed at an angle to the actuator's axis of displacement, use an actuator fitted with a hemispherical end plate or a flexure joint to achieve safe loading of the piezoelectric stack.

To attach a load to co-fired piezo stacks, we recommend using an epoxy that cures at a temperature lower than 80 °C (176 °F), such as our 353NDPK or TS10 epoxies or Loctite® Hysol® 9340. Loads should be mounted only to the translating, uncoated faces of the piezoelectric stack; the coated sides of our co-fired piezo stacks do not translate, and mounting a load to a non-translating face may lead to the mechanical failure of the actuator. Our PC4 Series Piezo Stacks are compatible with hemispheres and end cups to minimize internal stress when mounting. Please refer to the info icons (

) for item-specific compatibility. Some correct and incorrect approaches to interfacing loads with piezoelectric stacks fitted with end plates are discussed in the following.

Click to Enlarge
Figure 2: Actuation of a lever arm using stack fitted with a flat plate (A, Incorrect), and a hemispherical plate (B, Correct).

Figure 2 presents incorrect (A, far-left) and correct (B, near-left) methods for using a piezoelectric stack to actuate a lever arm. The correct method uses a hemispherical end plate so that, regardless of the angle of the lever arm, the force exerted is always directed along the translational axis of the actuator. The incorrect interfacing of the stack and the lever arm, shown at far-left, endangers the stack by applying the full force of the load to one edge of the stack. This uneven loading causes dangerous stresses in the actuator, including a bending moment around the base.

Figure 3 shows one incorrect (near-right, A) and three correct approaches for interfacing a flat-bottomed, off-axis load with a piezoelectric stack. Approaches A and B are similar to the incorrect and correct approaches, respectively, shown in the image at left. Correct approach C shows a conical end cup, such as the PKFCUP, acting as an interface. The flat surface is affixed to the mating surface of the load, and the concave surface fits over the hemispherical dome of the end plate. In the case of correct approach D, a flexure mount acts as an interface between the off-axis flat mounting surface of the load and the flat mounting plate of the actuator. The flexure mount ensures that the load is both uniformly distributed over the surface plate of the actuator and that the loading force is directed along the translational axis of the actuator.

Operating Under High-Frequency Dynamic Conditions
It may be necessary to implement an external temperature-control system to cool the device when it is operated at high frequencies. High-frequency operation causes the internal temperature of the piezoelectric device to rise. The dependence of the device temperature on the drive voltage frequency for select products can be found in the Spec Sheet accessed by clicking the red docs icon (

) below. The temperature of the device should not be allowed to exceed its specified maximum operating temperature.

Quick changes in the applied voltage result in fast dimensional changes to the piezoelectric stack. The magnitude of the applied voltage determines the nominal extension of the stack. Assuming the driving voltage signal resembles a step function, the minimum time, Tmin, required for the length of the actuator to transition between its initial and final values is approximately 1/3 the period of resonant frequency. If there is no load applied to the piezoelectric stack, its resonant frequency is ƒo and its minimum response time is: 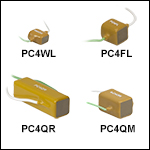 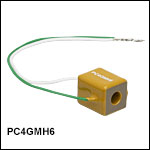 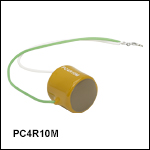