Segment Displacement is Parallel to:

Piezo Chip with Through Hole

Piezo Stack with Through Hole

Shear Piezo Chips
The polarity of the voltage bias controls whether the shear piezo chips and stacks provide positive or negative displacement along the lateral translation axis. The diagram above illustrates the response of a piezo chip to a voltage applied across its electrodes, which are located on the top and bottom surfaces. When the bottom surface is fixed in place, positively biasing the top surface results in it translating over the side marked with the green bar. When negatively biased, the top surface moves in the opposite direction.

Shear Piezo Stacks and Multi-Axis Positioners
Our shear piezo stacks consist of multiple discrete shear piezo chips bonded together using epoxy and copper foils. Epoxy is also used to glue flat alumina end plates to the top and bottom surfaces of the stacks. As is the case for our chips, a single shear piezo stack can be forward or reverse biased to provide displacement in a positive or negative direction along a single lateral axis. Positioners providing displacement along both lateral axes mate the upper end plate of one shear piezo stack to the lower end plate of another. Thorlabs' three-axis positioner bonds two shear and one longitudinally-translating discrete piezo stacks together, with the last providing translation in the direction normal to the surfaces of the stacks. Please note that the longitudinally-translating stack provides displacement only along the positive displacement axis. This stack cannot be reverse biased, and it has a different drive voltage range than the shear piezo stacks. Two wire leads are attached to each stack, which allows the stacks to be individually controlled for fine positioning of the top surface of the positioner.

Shear vs. Axial Strain
In shear piezo elements, there is an orthogonal relationship between the polarization direction of the piezo material and the direction of the electric field induced by the voltage bias. When shear piezos are operated as specified, applying a voltage bias across the electrodes creates a shear strain in the piezo element. This happens as microscopic, and reversible, changes in the piezo material occur to better align its overall polarization direction with the direction of the applied electric field. In contrast, the more common longitudinally-translating piezo chips are operated by applying an electric field parallel to the polarization direction of the piezo material, which results in displacement along that same axial direction normal to the surface of the electrodes. Please note that hysteresis from the shear strain of piezo ceramics can be up to 40%. This is greater than the hysteresis that results from the axial strain of piezos, which provides longitudinal displacement.

Piezo Drivers
We generally recommend Thorlabs' HVA200 High-Voltage Amplifier to drive the shear piezo chips and stacks. For the PN5FC3 multi-axis piezo positioner, note that while the HVA200 can drive the stack in the longitudinal direction, the relatively low current provided by the HVA200 combined with the high capacitance of the stack limits the maximum driving voltage frequency. In addition, care must be taken not to exceed the driving voltage limits of this stack. Drivers better compatible with the longitudinally-translating stack incorporated in the PN5FC3 include the MDT69xB or KPZ101 Open-Loop Controllers, and the BPC301 and BPC303 Closed-Loop Controllers are also options.

Click to Enlarge
Figure 1: A green bar indicates the lateral motion direction of the shear piezos. The surface electrode that has a positive voltage applied to it will be laterally displaced towards the painted green bar.

Electrical Bias and Shear Strain
Thorlabs' shear piezo chips have chemically deposited gold electrodes on the top and bottom 5 mm x 5 mm surfaces. When a voltage (±200 V maximum) is applied across these electrodes, a shear strain is created in the piezo material. The deformation induced by the shear strain causes two parallel side surfaces to tilt in unison, which causes the top surface to translate laterally with respect to the bottom surface.

This lateral motion, which is characteristic of shear piezos, is a consequence of the applied electric field (E) being perpendicular the polarization (P) of the piezo material. The relationships among the polarization direction, the applied electric field, and the direction of the lateral displacement of the chip’s surface is shown in Figure 1. When the electric field is applied so that the electrode on the top surface is positively biased, the top surface will translate over the side of the chip marked by the green bar; the top surface will move laterally in the direction indicated by the white arrow.  Please note that using one 5 mm x 5 mm surface of the chip to translate a load requires the opposite surface to be mounted to a fixed surface. See the Interfacing a Piezoelectric Element with a Load or Mating Surface section below for more details.

These shear piezo chips have identical electrodes on their top and bottom surfaces, and the induced shear strain is symmetrical. Therefore, these chips can be driven by bipolar symmetrical electrical supplies. We recommend Thorlabs' HVA200 High-Voltage Amplifier, which is available below.

Click to Enlarge
Figure 2 Example plot illustrating that the stroke for a ±100 V driving voltage range is approximately 30% that for a ±200 V range. Relative hysteresis under both operating conditions is also shown.

Hysteresis and Lateral Displacement
The displacement of a piezo chip or stack depends on both the instantaneous driving voltage and how the element was driven in the past. This hysteresis is a consequence of the intrinsic properties of the piezo element. The Displacement vs. Voltage graphs, provided in the tables below, give the hysteresis exhibited by the lateral displacement of the top surface of a shear piezo chip or stack when the bottom surface is fixed and the driving voltage is varied from -200 V to 200 V. Hysteresis from the shear strain of piezo ceramics can be up to 40%, which is greater than that from the axial strain of piezos. This must be considered when driving shear piezo devices.

As is illustrated by the graph on the left, reducing the driving voltage range from ±200 V to ±100 V decreases the total displacement to approximately 30% of the maximum rated stroke.

Adding an Electrical Connection to the PL5FB External Electrodes
The PL5FB does not have a flat plate on the mounting surfaces and therefore does not have copper leads. Electrical connection to the external electrodes on the PL5FB can be achieved by using mechanical contacts, gluing with electrically conductive glues, or wire bonding. Directly soldering on the contact surface will affect the flatness and load distribution, thus negatively impacting performance.

Soldering Wire Leads to the PL5FBP3 Electrodes
The PL5FBP3 has a flat mounting plate on the mounting surfaces and therefore includes copper leads on the electrodes for electrical connections. If wire leads must be attached to the electrodes, a soldering temperature no higher than 370 °C (700 °F) should be used, and heat should be applied to each electrode for a maximum of 2 seconds. Solder the lead to the middle of the electrode and keep the region over which heat is applied as small as possible.

Caution: After driving, the piezo is fully charged. Directly connecting the positive and negative wire leads has the risk of electricity discharging, spark, and even failure. We recommend using a resistor (>1 kΩ) between the wires to release the charge.

Interfacing a Piezoelectric Element with a Load
As the top and bottom surfaces of shear piezo chips move relative to one another, one surface must be mounted to a fixed substrate to use the chip as an actuator. The shear piezo chips can be mounted either by mechanical clamping or gluing. Correct and incorrect examples are shown and described below.

The load should be centered on and applied uniformly over as much of the chip’s mounting surface as possible. The direction of the loading should be normal to the loading surface of the chip. The mating surfaces of both the actuator and the load or surface must be highly flat and smooth with surface roughness less than 10 µm and a Mohs hardness higher than 6. We recommend using alumina endplates (item # PKFEP4), which have a Mohs hardness of 9 and will cap the contact surfaces with an insulating layer. Alternately, insulation can also be achieved using a polyimide film. Ensure good parallelism between the two mating surfaces before applying pressure.

When taking a mechanical clamping approach, the axial stress induced by the clamp must be well controlled. Too little pressure can lead to slippage, whereas too much pressure can damage the ceramic. With the appropriate contact surface, and in the case of low shear force, a pressure of 1 to 3 MPa is recommended. The stiffness of the loading mechanism in the actuation direction should be as low as possible in order not to hinder the movement of the piezo actuator.

When gluing the piezo in place it is important to apply a very thin glue layer between the shear chip and the substrate, as shown below. This is generally ensured by using low viscosity glue. Some pressure (e.g. less than 3 MPa) should be applied during the curing process. To attach a load to the piezo chip, we recommend using an epoxy that cures at a temperature lower than 80 °C (176 °F), such as our 353NDPK, TS10, or G14250 epoxies or Loctite® Hysol® 9340. Loads should be mounted only to the faces of the piezoelectric chip that translate. Mounting a load to a non-translating face may lead to the mechanical failure of the actuator.

Some correct and incorrect approaches to interfacing loads with piezoelectric chips are shown in the diagrams below.

Click to Enlarge
Figure 3 Correct mechanical clamping methods include using a spring to apply force. Note that the incorrect example on the right is missing an end plate between the chip and load.

Click to Enlarge
Figure 4 The piezo should be held in place using adhesives as shown on the left. Note that applying glue as shown on the right will impede the lateral translation of the piezo.

Cleaning for Vacuum Compatibility
When suitable for vacuum applications, Thorlabs' piezo chips have the rated vacuum compatibility specified in their Info Icons (

). While no extra cleaning is needed to achieve this value, we recommend cleaning these products with isopropyl alcohol (IPA) in an ultrasonic immersion tank and then baking it at 60 °C for two hours. Do not immerse the device in other organic solvents. 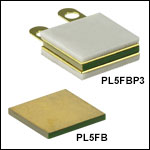 Each piezo chip is fabricated from a single layer of piezoelectric ceramic with chemically deposited gold electrodes on the top and bottom of the chip. The driving voltage is applied across these electrodes. The PL5FBP3 includes flat end plates (Item # PKFEP4) with copper plates and leads glued to the top and bottom of the piezo. The end plates spread the contact force of the load over the entire mounting face of the piezo while the copper leads, which are extended beyond the footprint of the chip, facilitate making electrical connections.

Applying a voltage less than -200 V or greater than 200 V to either electrode will decrease the the life of these chips and may cause mechanical failure. 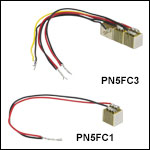 All positioners include one or two shear stacks. Applying a voltage less than -200 V or greater than 200 V to either electrode of a shear stack will decrease its lifetime and may cause mechanical failure. Our PN5FC3 also includes a longitudinally-translating stack, which provides displacement in the Z-axis direction. Applying a voltage greater than 150 V to this longitudinally-translating stack will decrease the life of the stack and may cause mechanical failure, and, unlike the shear stacks, applying a reverse bias may cause this stack to mechanically fail.

Cross talk between the two shear stacks bonded together in the PN5FC2 and PN5FC3 is no more than 5%.

This Alumina Flat End Plate is designed to spread the force at the contact point over the entire surface of the piezo chip. It is used on the top and bottom surface of the PL5FBP3 piezo chip above and has a dimensional tolerance of ±0.04 mm.